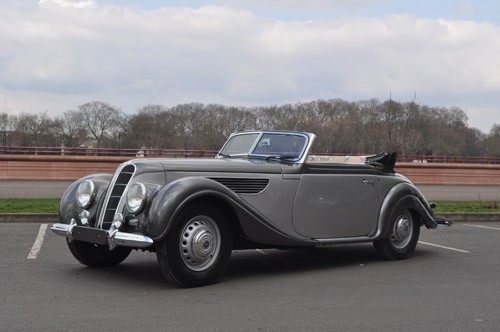 The history of the automobile in the immediate aftermath of World War II is pretty interesting. In the United States, many car manufacturers resumed production of their pre-war models, but in Europe, the widespread destruction threw everything into chaos. BMW’s pre-war manufacturing activities took place in Eisenach. But the Soviet Union held the territory when production resumed in 1946.

The 327 was first introduced in 1937 and was built through 1941. Production resumed in 1946 with all 1946 through 1951 cars being badged as BMWs (although they were not sold, officially, by BMW). Cars built from 1952 through the end of production in 1955 were badged as EMWs. EMW would later go on to become Wartburg.

The engine is a 2.0-liter straight-six making 55 horsepower. This car was in a museum for the last five years and was recently restored. It is a numbers matching car. Only 505 327s were built after the war, with an unknown split between BMW and EMW. This one should sell for between $140,000-$185,000. Click here for more info and here for more from this sale.