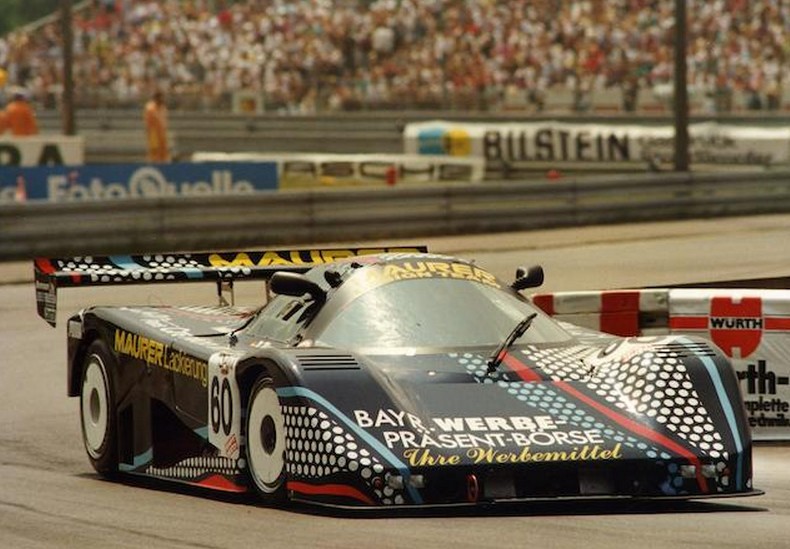 Group C racing was awesome. Loads of major automobile manufacturers built ridiculous prototype sports racing cars – some of the fastest race cars ever built. They had huge engines with big turbos and they all looked like wedges with wheels. And lost among the Sauber-Mercedes, Jaguars and Porsches were some privateers cars, like this Maurer.

Walter Maurer was an artist known in the car world as being part of BMW’s “Art Cars” projects as well as a part-time racing driver. The car was designed by an ex-Sauber engineer and the body was built by Dornier Aerospace. Maurer’s ties to BMW landed him a sweet 2.0-liter turbocharged BMW straight-four that could produce 1,350 horsepower in qualifying trim. Maurer designed the paint scheme himself.

Maurer drove the car in competition with co-drivers Helmut Gall and Edgar Dören lending a hand during endurance events. This car did not compete in the World Sportscar Championship, and instead raced in Supercup, a German series that also used Group C cars. It’s best result was 10th in 1988 and a 12th place finish in 1989. It has been used recently and would be great to take vintage racing. It should sell for between $1,000,000-$1,300,000. Click here for more info and here for the rest of Bonhams’ Spa lineup.