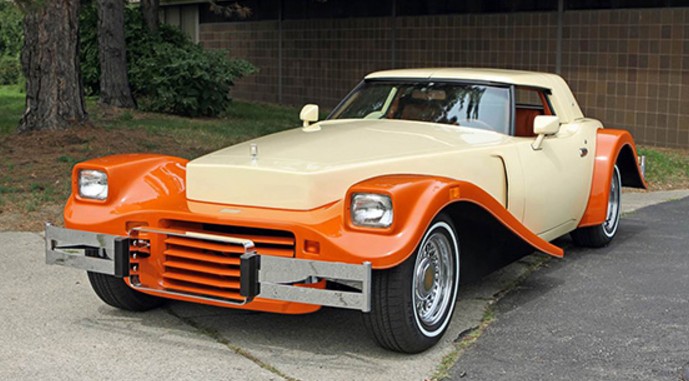 Gordon Buehrig was one of America’s great automotive designers. He worked for Packard, Stutz, and GM but is mostly remembered as E.L. Cord’s go-to man for some of America’s greatest cars. He designed the Auburn Boattail Speedster and the Cord 810, both for Cord’s little empire. Later successes included the Continental Mk II.

In 1979 – at age 75 – Buehrig was sort of honored by Detroit-area businessman and mega-collector Richard Kughn who decided to go into business with Mr. Buehrig to build this, the Carriage-Roof Coupe. Neo-classics were just becoming really popular and why not have one of the designers of one of the original-classics pen one?

This car is bodied in fiberglass and is powered by a 5.7-liter V-8. The design is decidedly Cord-like, which makes sense given their shared origins. Only three of these were built as the $130,000 price was deemed prohibitive. The first example is now in the Auburn-Cord-Duesenberg Museum. Richard Kughn still retains the other two, this being one of them. Interestingly, Auctions America originally had a photo of the other car posted. Apparently Kughn changed his mind and wanted to keep that one because now this is the one in the catalog.

No estimate is available for this car, so we’ll just have to wait and see, but it is the first Buehrig Carriage-Roof Coupe to ever be offered for sale publicly. Click here for more info and here for more from this sale.