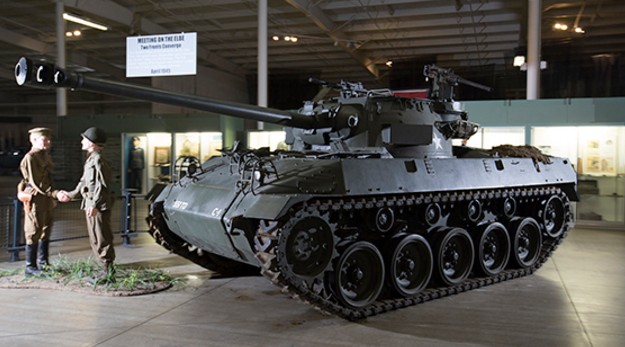 World War II tanks are just awesome. And the Buick-built M18 Hellcat was one of the best. It was the most effective American tank destroyer in WWII and the fastest American tracked armored vehicle until the M1 Abrams of 1980. As a tank destroyer, this thing was designed to destroy other tanks. What’s manlier than a tank built to eliminate its own kind? Not much.

Designed in 1942, the M18 entered service in 1943 and Buick turned out 2,507 of them through October of 1944. It’s powered by a 350 horsepower, Continental nine-cylinder radial engine. Top speed was 55 mph. Imagine one of these bearing down on you at top speed. Pretty frightening.

The pre-sale estimate is between $275,000-$350,000. WWII tanks in great condition trade hands for big money. They are both rare and desirable because of the generation of soldiers they represent. Click here for more info and here for more from Auctions America.