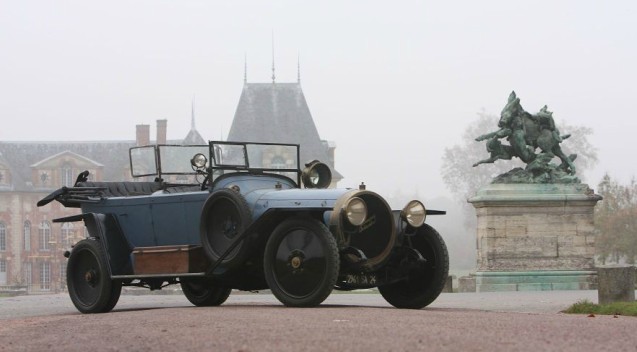 The Type O6 was the most powerful car produced by Delaunay-Belleville prior to the First World War. It featured an 8-liter straight-six engine producing 100 horsepower at an insanely low, count-the-revs 1500 rpm. The car is capable of just over 70 mph.

These cars were sold as bare chassis with coachwork to be added later. This particular car retains its original coachwork from J. Rothschild & Sons. Over time, the hood had weakened and was replaced. The car was also repainted and mechanically refreshed – but not restored – in the 1980s.

This car was purchased new by Edward Daubree – part of the family that founded a little known company called “Michelin.” After World War I the car was given to his nephew and at the onset of the Second World War the wheels were removed from the car and walled up in a house, while the rest of the car was stashed in a different residence. The car was re-discovered in 1986 and brought back to life. It remains in the Michelin family as it has its entire existence. The car is being sold to raise funds for medical research.

Delaunay-Belleville cars are extremely rare and valuable as they were once near the height of French automobile production – being owned by royalty from France to Russia. They were out of production by the end of the 1920s and they rarely come up for sale. Here is a chance to own one with known ownership (the same family) from new. It’s a massive, amazing car with a fascinating history. Buy it.

The pre-sale estimate is a wide $525,000-$785,000. It is being sold for a charitable cause, but that shouldn’t have a huge impact on its selling price because it is worth a ton of money as it is. For a complete run down of this car, click here. To see the rest of Artcurial’s lineup, click here.