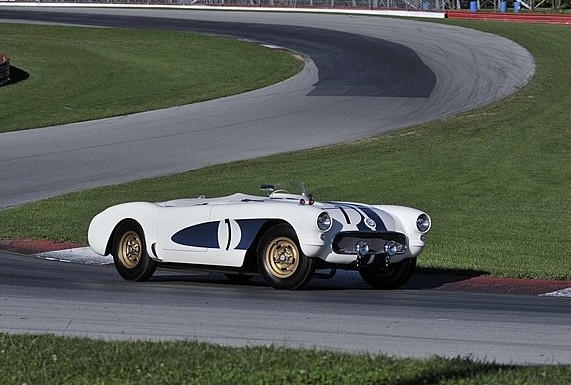 It seems like there’s always at least one more Corvette out there that will come along and smash price records for the model. This is one of those cars that has that opportunity. In all honesty though, I have no idea what it will bring – but it is a very important Corvette.

In 1955, Ford introduced the Thunderbird and it promptly walloped the Corvette, stealing a large portion of its sales. Zora Arkus-Duntov, the father of the Corvette, was afraid that GM was about to give it the axe and realized that the supposed sports car lacked any sort of sporting credentials.

So he and his team put together a special prototype – the car you see here – and fitted it with a 255 horsepower 5.0-liter V-8. He promptly took the car to Daytona Speed Week and set a world record for the Flying Mile at just a tick over 150 mph, obliterating the record. This happened just before the 1956 GM Motorama in New York City. It drew a lot of interest, but more had to be done.

Ed Cole, head of GM at the time, announced that Chevrolet would be attacking the 12 Hours of Sebring. Duntov felt strongly that the track was not safe and that the car would not be able to last, so Cole replaced him as a driver with John Fitch and partnered him with Walt Hansgen.

Ed Cole put three-time Indy 500 winner Mauri Rose in charge of the team and Rose selected legendary NASCAR mechanic Smokey Yunick to prepare the Corvettes for Sebring (there’s a lot of famous name dropping going on here, sorry). In all, Chevy entered four cars – three of which were 1955 bodies on 1956 chassis – and one special prototype – the car you see here.

Two of the Corvettes failed early in the race. Fitch had a clutch slipping on this car on the second lap but somehow this car managed to win its class and finish 9th overall. Corvettes never did much factory-backed racing (until the C5-R anyway) and this car was the first and it brought the brand its most important victory – one that would keep Corvette around for another 60 years.

When Chevrolet publicized the win, they referred to the car as “The Real McCoy” – which is what this car is known as today. It is full of one-off, custom-built-by-GM parts for racing and is one of the most important Corvettes in existence. And it is going to cross the block. Read more here and check out more from this sale here.