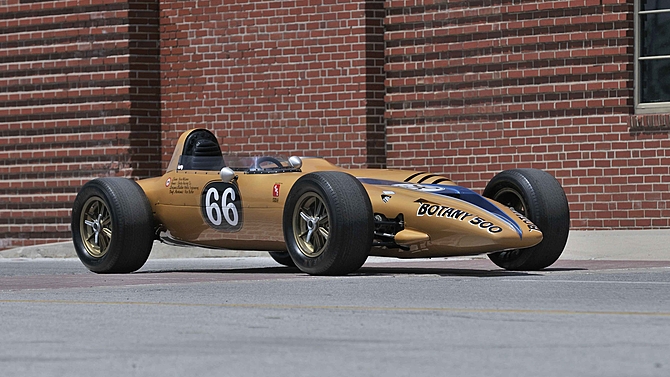 Everyone remembers Andy Granatelli’s STP turbine indy cars from 1967 and 1968 – back in the day when the Indianapolis 500 stood for speed and innovation. The STP-Paxton Turbocars were driven by Parnelli Jones and Joe Leonard and dominated the races but always failed prior to the finish.

Well in 1968, Carroll Shelby also built a similar turbine-powered open-wheel racer and entered it in the Indy 500. The team practiced two cars – this one was driven by Bruce McLaren. USAC changed the rules surrounding turbine cars and while the STP cars were still legal, the Shelby cars were not able to compete and were withdrawn prior to qualifying.

The powerplant here is a General Electric T-58 shaft-drive turbine putting out a crazy 1,325 horsepower. This car is pristine and is currently on display the Indianapolis Motor Speedway Museum in their Turbine Indy Car exhibit. It’s a pretty cool opportunity that should command a pretty princely sum. You can read more here and see more from this sale here.