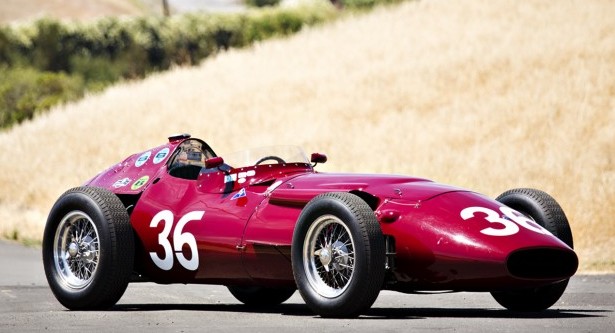 The 1950s was the “Golden Era” of Formula One. The glamour that we all know now was really taking shape, and the drivers were larger-than-life men who manhandled these cars around some of the most legendary and dangerous tracks the world has to offer. And the danger was certainly high – you never knew who was going to be alive for the next race.

Few names capture the glory of 1950s-era F1 like Maserati. The first 250F was built in 1954 as the new rules for Grand Prix racing dictated a 2.5-liter engine formula. Maserati installed their 2.5-liter straight-six in a nimble little chassis and the 250F was born. Power output is listed at 270 horsepower.

The 250F won races through 1957 and was campaigned in to the 1960 season by some privateers. This is one of two experimental “offset” cars built, which put the driveshaft next to the driver and allowed for a lower cockpit (and center of gravity). This car won the 1956 Italian Grand Prix at Monza with Stirling Moss at the wheel as a factory entry. Moss claims the 250F was the best front-engined F1 car he ever drove.

Shortly after its maiden victory, the car became a collectible. It has had seven keepers between Maserati and the current owner. Only 26 250Fs were built, and this is one of two “offset” cars. It is exquisite and can be yours for between $4,000,000-$6,000,000. Click here for more info and here for more from Gooding at Pebble Beach.