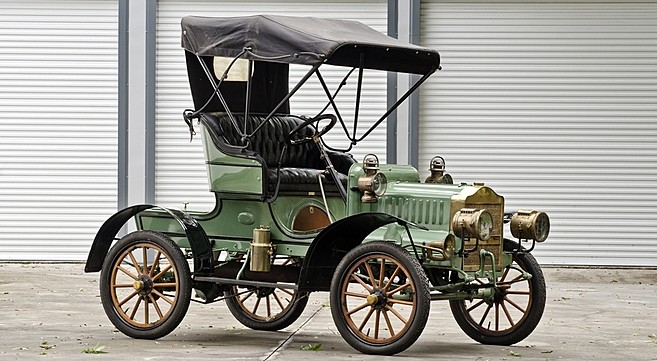 Maxwell is an interesting (and important) early American automobile manufacturer. It was founded in 1904 by Jonathan Maxwell and Benjamin Briscoe (who had another car company named after himself). Maxwell was independent until 1910, when Briscoe formed the United States Motor Company, which brought 11 car companies under one umbrella (much like General Motors).

USMC failed in 1912 and Maxwell was the only company to come out if it alive. But by 1920, things were dire and a man named Walter P. Chrysler took control of Maxwell. Shortly thereafter, it essentially became the Chrysler we know today.

This Model LC was the entry-level Maxwell for 1908 and it was only called the “LC” for this model year. It uses a two-cylinder engine making 14 horsepower and was one of the first cars made primarily of steel. The car came in one body style, but it was reliable and a major success (Maxwell was #3 in sales for 1908, behind Ford and Buick).

This car sold in June, 2012 for $19,000. The market has gone up a little, but it shouldn’t break the bank for anyone looking to acquire a 100+ year old car to have a little fun with. Click here for more info and here for more from Mecum in Dallas.