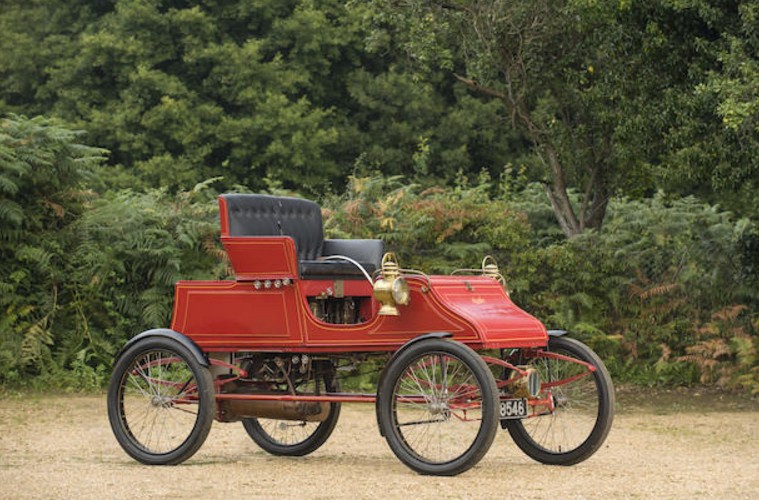 Earlier this week we talked about Alexandre Darracq and how he founded the company that would ultimately become Gladiator – and how that company was intertwined with Adolphe Clément’s automotive exploits as well as those of Charles Chetwynd-Talbot. Well, after Darracq left Gladiator, he founded Société A. Darracq near Paris. The first car designed and built in-house by Darracq arrived in 1900 which was a 6.5 horsepower single-cylinder car of 785cc, such as the 1901 model you see here.

This car was found in France in the 1960s and brought to England where it was restored and has been well known in Veteran car circles since. The body is a period style, but not original. It’s been well kept and is eligible for the all-important London to Brighton Veteran Car Run.

So, knowing that this company was founded by Alexandre Darracq, what other names did it go by during it’s existence? Good question. In 1902, the cars were introduced in Germany where they were sold as an ‘Opel Darracq’, in conjunction with Adam Opel and his company. This partnership lasted for but a few years and Darracq began looking for other markets, particularly car-hungry England.

In 1919, Sunbeam merged with Clément-Talbot, the English importer of the French Clément-Bayard cars (see the Gladiator post from Monday for more on this). This created Sunbeam-Talbot, and cars were sold under this name. In 1920, Darracq merged with Sunbeam-Talbot to form Sunbeam-Talbot-Darracq (or STD Motors, which is a less-than flattering name). There were cars badged as ‘Talbot-Darracq’. When STD went bust in 1935, the factory and company was acquired by A.F. Lago, beginning the Talbot-Lago make. The name of Alexandre Darracq, who had cashed out in 1913, slowly evaporated from the automotive landscape and was long gone by the time Simca swept up Talbot-Lago in 1958.

The detailed history of the early automotive industry is fascinating and this is a car from a company that played a pivotal role. The pre-sale estimate is $87,000-$100,000. For the complete description, click here and for the rest of Bonhams at the RAF Museum, click here.