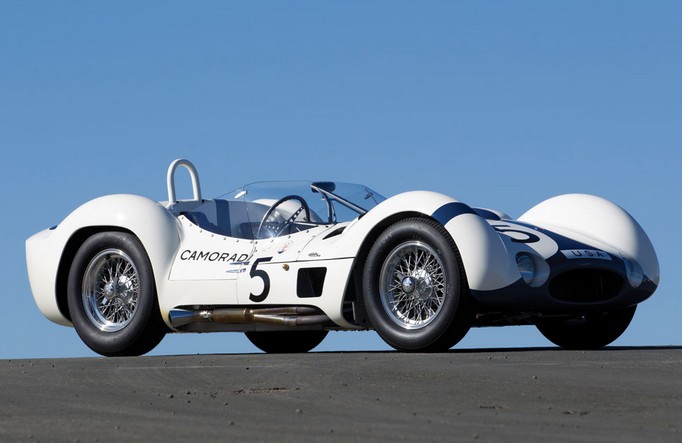 In my mind, this is the most-famous Maserati ever built. If you want a classic race car from the Trident People, there are no other cars to consider. It’s a Birdcage or nothing.

The Tipo 61 was introduced in 1959 and it uses an intricate space-frame chassis with hundred of tiny steel tubes connecting everything – hence the nickname “Birdcage.” The cars were used for assaults on Le Mans and every other major sports car race in the early 1960s. The cars were very quick – but the mechanicals were unreliable, so they never won the big races they were supposed to.

This car is from 1960 – the final year was 1961. Only 16 were built in total over the three years (this was the 11th made). The engine is a 2.9-liter straight-four making 250 horsepower. It also weighed practically nothing – only 1,300 pounds. This was a team car of the Camoradi squad – headed by American Lloyd Casner. Its competition history includes the following:

It then competed in (and won) some SCCA races in privateer hands later that year. It was sold a few more times before ending up in the U.K. in the early 1970s when it was restored and subsequently damaged during a historic event. A few more European owners enjoyed it after that, restoring it again in 1986 and using it in the Goodwood Revival and Festival of Speed. The most recent restoration was carried out in 2006.

This is a very rare car and one of the most desirable and legendary race cars of the 1950s/1960s. And if you’re going to buy one – this is the one to have. It has some of the best competition history and the best paint scheme. It should sell for between $3,000,000-$4,000,000. Click here for more info and here for more from this sale.