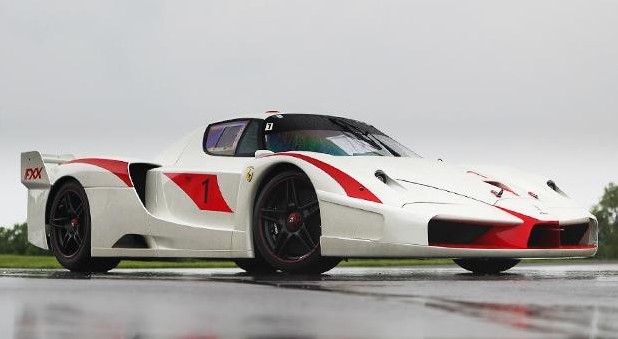 The Ferrari Enzo was the epitome of supercars when it came out in 2002. But some people are really hard to please and Ferrari realized they could capitalize on these people and sell them an upgraded Enzo for double the money.

So in 2005 they took a street-legal Enzo and made it entirely street-illegal. The engine was enlarged – to a 6.3-liter V-12 making 789 horsepower. Then they threw in their Formula One transmission, upgraded brakes, and custom-made racing slicks.

Then they sought out customers (you weren’t allowed to approach Ferrari with the intent to buy one). You would purchase the car (at something like $1.8 million a pop) and you would be allowed to drive it on Ferrari-designated track days all over the world. Then Ferrari would house the car for you – forget taking your new $2 million toy home! Owners and drivers (including Michael Schumacher) would send all their track day data back to Ferrari for whatever purposes they saw fit.

The Evoluzione program began after all 30 FXXs had been built. It was a kit that bumped horsepower up to 850, lowered aerodynamic drag, and increased shift times. This car has that kit. This was the first FXX built and has had a single-owner from new. Thankfully, Ferrari has removed restrictions on taking the car home so now you can take this one to yours. It is still the ultimate example of Ferrari engineering superiority and track prowess. It should sell for between $2,300,000-$2,600,000. Click here for more info and here for more from Gooding’s sale.