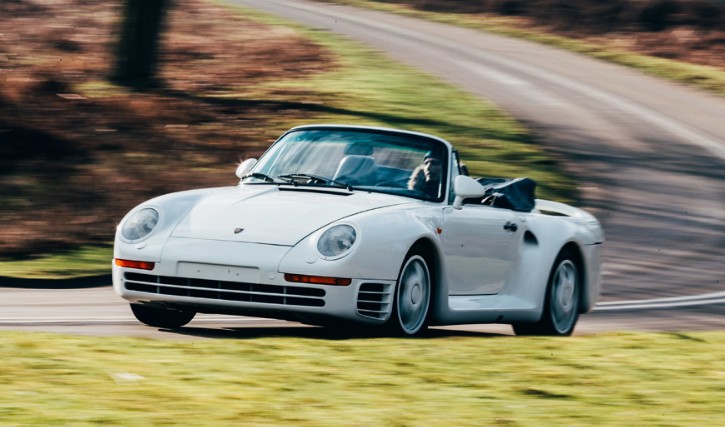 The 959 was the most technologically advanced motorcar available for purchase when it debuted in 1986. It was the fastest car in the world too, topping out at 197 mph. It is powered by a 2.8-liter twin-turbo flat-6 making 444 horsepower. With a complex all-wheel drive setup and active suspension, this car was years ahead of its time.

So we come back to the elephant in the room. What’s with the drop top? Porsche never built one… so what is this? Well, Porsche sold one of the 337 959s to racing driver Jürgen Lässig who, well, had a slight incident in this car while racing down the Autobahn. He sold what was left of it to Auto Becker, a German used car company. They meticulously rebuilt the car but decided, since it wasn’t original anymore anyway, to make it into a convertible. It’s pretty crazy and pretty cool. Sure, it’ll never be as valuable as a traditional 959, but it is rarer… and sunshinier. Yes, that’s now a word. A removable hardtop is included as well.

This wonderful piece of someone’s imagination is estimated to bring between $1,300,000-$1,600,000 at auction. Click here for more info and here for more from Coys.