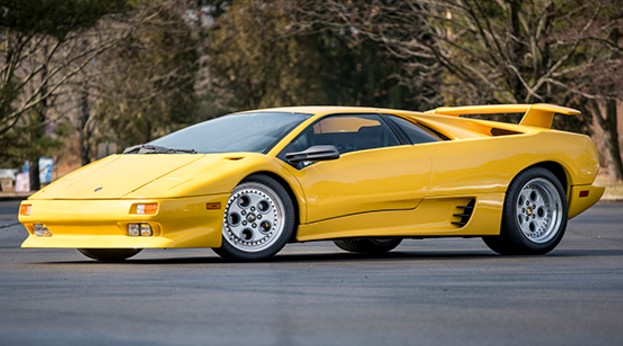 The Lamborghini Diablo kicked off the craziness that was the supercar world in the 1990s. Introduced in 1990, the car’s development goes back to 1985 when Lambo was under Mimran Brothers ownership. When Chrysler bought the company, they ensured the new car’s success and put it into production.

The original Diablo, of which this is a wonderful example, was rear-wheel drive and powered by a 5.7-liter V-12 making 485 horsepower. Top speed was 202 mph, the first Lamborghini to top 200. The body was designed by Marcello Gandini and it was clearly of a different generation than the lame duck Countach it replaced. This car sports the optional factory rear wing.

The Diablo VT brought four-wheel drive to the Diablo line in 1993 and the original RWD version was discontinued in 1996. In total, 873 were built making it the most popular of all Diablo variants. Recently serviced, this prime example from the dawn of modern supercars should sell for between $155,000-$165,000. Click here for more info and here for more from this sale.