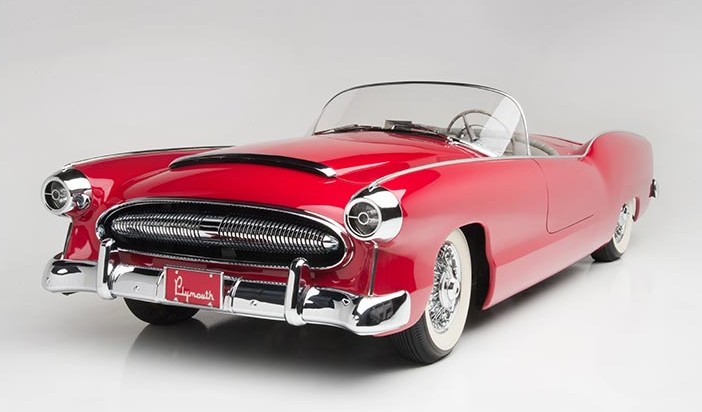 In 1953, Chevrolet introduced the Corvette. Ford was working furiously trying to get the Thunderbird launched and Chrysler was wondering what they were supposed to be doing. There were a number of fabulous concept cars from Chrysler in the 1950s, but just about zero of them ever made it to production.

The Belmont was a one-off concept introduced at the 1954 Chicago Auto Show. Styling was by Virgil Exner and the body was made out of fiberglass – a first for Chrysler. The engine is a 3.9-liter V-8 making 150 horsepower. With only two seats, this would have been a perfect car to battle the Corvette and Thunderbird. But perhaps as a DeSoto and not necessarily a Plymouth. But it was not to be and this was the only one built.

It was originally a very nice light blue color but whenever it was restored, it was repainted red. It recently made appearances at Amelia Island and Pebble Beach and is currently looking for a good home – which, with a car of this caliber, shouldn’t be too hard to find. Look for it to bring between $750,000-$1,250,000. Click here for more info and here for more from Barrett-Jackson.