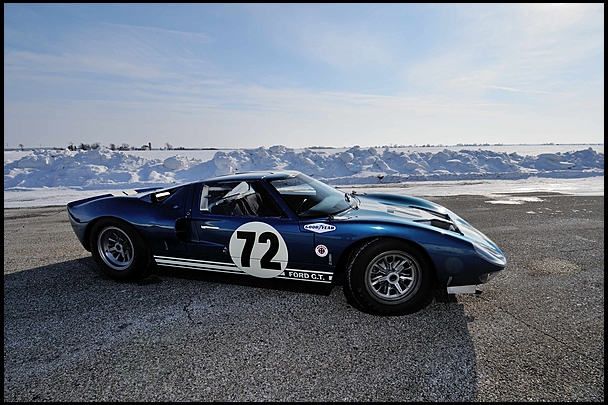 Everyone knows the story of how the Ford GT40 came into existence – the Ford vs. Enzo Ferrari showdown that led Ford to dominate the 24 Hours of Le Mans for the latter part of the 1960s. The first GT40 made its world debut at the New York Auto Show in April 1964.

The first two GT40 prototypes were wrecked in Le Mans testing. Chassis #2 was repaired and found its way into the 1000km of the Nurburgring. But Ford needed more cars, so two more prototype were built. This was the second of those additional prototypes. This one was the first one built with a lighter steel chassis. It was also among the first group of GT40s to actually compete at the 24 Hours of Le Mans

The competition history of this car includes:

The car was retired from competition prior to the 1965 24 Hours of Le Mans. Ford restored the car and sent it on a promotional tour of the auto show circuit. In 1971, it was sold to its first owner. A restoration to race condition began in 1973 and wasn’t completed until after 2010.

This is one of two Shelby American-prepared GT40s that raced and it’s one of only four Ford 289-powered GT40 prototypes. That engine, the 4.7-liter V-8, also called the Cobra home. This is the second-oldest GT40 in existence. and it is a big money car. Read more here and check out more from Mecum here.