Everything we’ve ever written about half-tracks on this site has become quite popular, so here you go: a 1929 non-military Citroen half-track. Or Snowcat. Citroen actually built half-tracks (or Kégresse, for the name of the man who patented the tracks) throughout the 1920s and 30s. The French Army used them, but they were also sold to anyone who wanted one. Andre Citroen used one to cross the Sahara.

This model is a P19 – it uses a 2.5-liter straight-six, making it more powerful than most other half-tracks built by Citroen. And rarer too. The rear end is a flatbed, which isn’t that exciting – but at least it’s functional.

In fact, this whole thing is very functional and could be a lot of fun. It’s certainly different. Strangely, Kégresse production ceased in 1940 (when Germany took over), but there are a number of these out there. Here’s your chance to get one for between $43,000-$65,000. Click here for more info and here for the rest of Artcurial’s auction lineup. 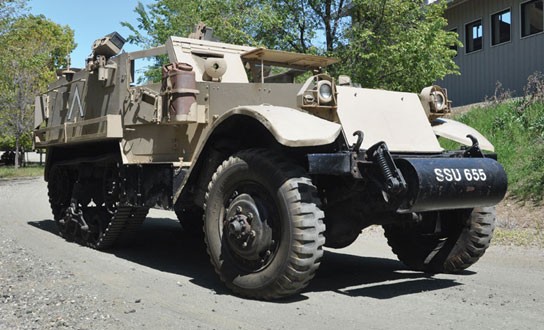