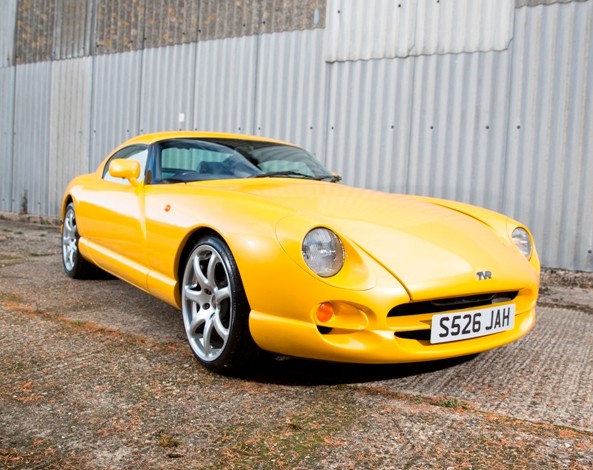 The TVR Cerbera is one of my favorite cars. Of all time. Ever. Why? No idea, really. Peter Wheeler bought TVR in the 1980s and introduced a series of sporty, exotic (and sometimes, downright weird) road cars through the 1990s and into the 2000s. The Cerbera was a 2+2 (a four-seat coupe, or a 3+1 in TVR parlance as the front seats were kind of offset so the rear passenger-side occupant had as much room as those upfront) that was available from 1995 through 2003.

Cerberas were generally eight-cylinder cars (a six was also offered), like this 4.5L Speed Eight that uses a 4.5-liter V-8 making 420 horsepower. Top speed was 185 mph and it will hit 60 in 4.1 seconds. It is a seriously quick car – but a handful as they didn’t have traction control. It’s a beast that takes some serious finesse to drive fast. They also never had the best reputation for quality, but who cares about reliability when you look this cool?

This car sports the wild TVR interior of the 1990s – it’s purple and has all the weird switch and gauge placements that made these cars famous. TVR built 271 Cerberas in 1999, supposedly, with a grand total of just 1,578 total. This one is really nice and for a while these were just used sports cars in the U.K. Now they are getting harder to find. Their prices are still relatively low, so get them before they all disappear – either into disrepair or into a million little pieces when they hit something or catch fire. This one should bring between $21,000-$28,000. That’s a steal and I wish I lived in the U.K. just so I could snag it. Click here for more info and here for more from this sale.