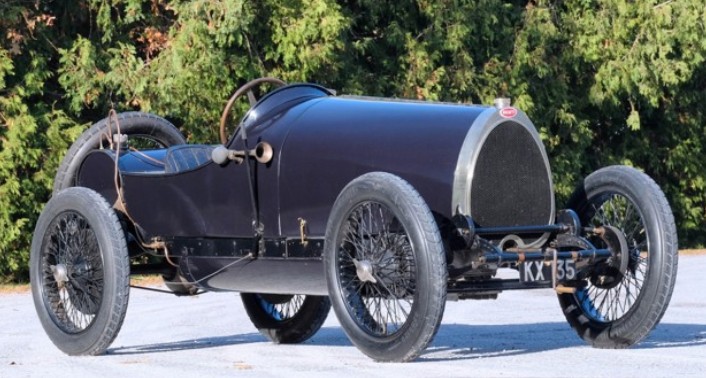 The Bugatti Type 30 was Bugatti’s touring car model that first went on sale in 1922. It used the same chassis as the earlier Brescia. It was built through 1926 and spawned a series of Bugatti models that would run through 1934. The engines and components would change, but the Type 30 was the initial model in what is considered to be the “30 line.”

The engine in this car is a 2.0-liter straight-eight generating between 65 and 70 horsepower, realistically. The eight-cylinder engine was more powerful than that four-cylinder in the Brescia but also had similar lightness and even more appeal.

The story on this car is that it was taken to the U.K. after WWII in the hopes of turning it into a race car. All that ended up happening was that the body was removed (and subsequently disappeared). Someone else acquired it and decided to restore it in the early-1980s. He had a new body built – a Dual-Cowl Torpedo in the style of Lavocat et Marsaud. This car also has it’s original chassis plate and engine (although it has undergone serious work).

About 600 Type 30s were built and there are some with original and more desirable coachwork. This one is nice and has been repainted in Bugatti blue within the last five years. This failed to sell at a different auction in 2008 with an approximate estimate of $225,000-$265,000. RM hasn’t published an estimate yet, but I expect something close to that, if not a little less. Click here for more info and here for more from this sale.