There are two very interesting things about this car. First, quite obviously, are its looks, as it resembles nothing else Mercedes has ever built. Second is that the looks are very 1950s and the chassis is very 1930s. That’s because it was bodied in the early-1950s by Wendler, the company most famous for building the bodies for the Porsche 550.

The post-war body features three headlights, which is certainly unusual. You could drive this car rather anonymously through a Mercedes-Benz festival and no one would be the wiser. That’s what I love about it – it is uniquely coachbuilt and removes all brand pretense from the equation. Believed to be one of four “Ponton” cabriolets built by Wendler, it is a one-off and should bring between $125,000-$180,000. Click here for more info and here for more from this sale. 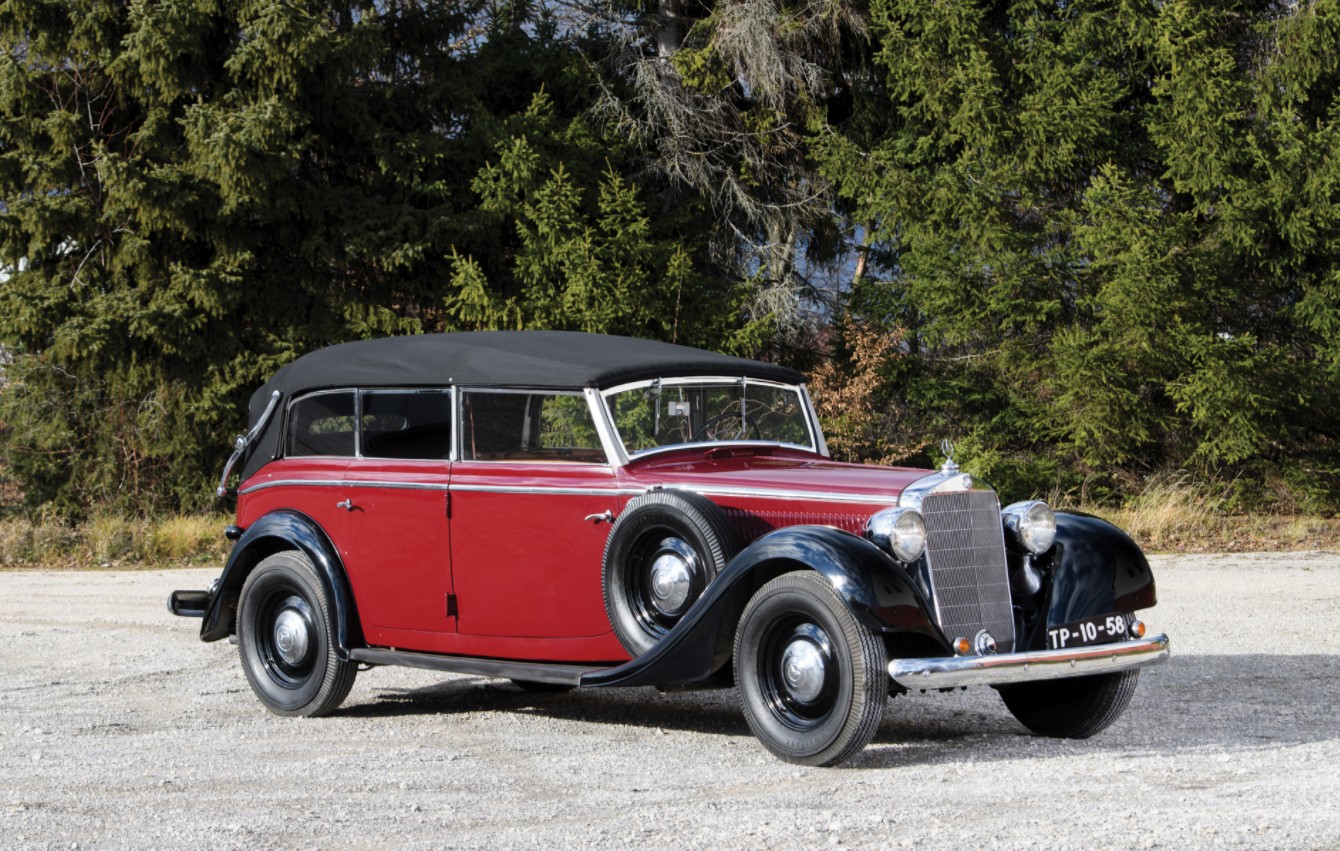 This wartime Mercedes-Benz might look big and imposing (and it is), not unlike a certain other large Mercedes touring sedan we recently featured, but it is, in fact, the smaller 320 model (W142, in internal MB-speak). The 320 was the replacement for the 290, which it took over duties for in 1937. It lasted through 1942, when Germany was forced to focus all of its production might on military needs.

The 320 was offered in two wheelbases, short and long. This is a long wheelbase car and it could’ve been had with a variety of bodywork, including bodies from outside coachbuilders. The base model was a four-door limousine, but there were four convertible versions offered from in-house coachbuilder Sindelfingen as well: Cabriolets A, B, D, and this, the seven-seater Pullman Cabriolet F.

The other thing this car has going for it is that it is equipped with the optional (beginning in 1938) engine with increased cylinder bore. It’s a 3.4-liter straight-six that makes 77 horsepower (which is actually the same rating the smaller, standard engine offered). This car, which looks very much like an Indiana Jones chase vehicle, has an older restoration. Mercedes pushed out 7,017 320s in total and I’m not sure how many carried this rare body style. It should bring between $130,000-$155,000. Click here for more info and here for more from this sale.

There are a bunch of people with money out there that think it is their duty to build the world’s greatest supercar. Newsflash: it isn’t. I’m not saying that’s the case with this car – because it was more of a “let’s revive a revered and dead company and build what they would be building had they never gone out of business in the first place” sort of thing.

The Invicta car company shut off the lights back in 1950 (for the second time – the original company closed in 1935 before returning in 1946). In 2002, some investors produced a concept of a new sports car called the S1. Deliveries started in 2003 (I think they were 2004 models) and the company built this lone model through about 2011 (they closed down in 2012).

The body is carbon fiber and the most of the components come from other road cars – including the engine, which, in this car, is a 320 horsepower version of Ford’s SVT 4.6-liter V-8 (a 5.0 could be had with almost twice the power). Top speed is about 170 mph and the car cost upwards of $150,000 when new.

You might be wondering why I’m featuring this car, and here’s my answer: so many of these little car companies pop up with a concept car and then no one ever knows if the thing actually goes into production or not. I was always unsure about this one (I’ve never seen one – have you?) but now I have proof that Invicta S1s were actually produced (I just don’t know how many). But you never see them for sale.

This one should sell for between $93,000-$120,000. Oh, and yes, those are the actual headlights and body-colored wheels, they aren’t aftermarket add-ons. You can find out more here and see more from this sale here.