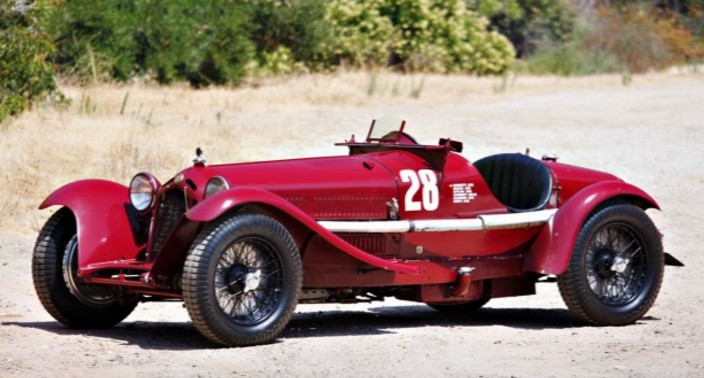 The 8C 2300 was the initial Alfa Romeo 8C offered and it was introduced in 1931. It was a sports car, through and through, and they were raced heavily in their day – both by the factory and privateers and winning Le Mans four times (in a row!).

The 8C 2300 Monza is a short-chassis model based on a car Alfa ran at Monza in 1931 (basically they just cut some length out of a Spider chassis and put the exhaust down the side of the car). The first Monzas were just shortened Spiders, but for 1932 and 1933, the Monza was a model unto itself. Alfa didn’t build many, but race teams – like Scuderia Ferrari – converted some Spiders into Monzas.

And what we have here is an actual, Alfa Romeo factory-built 8C 2300 Monza. It carries a Brianza-built body and was sold new in Italy. It is one of the last Series 3 Monzas built and is powered by a supercharged 2.9-liter straight-eight making in excess of 180 horsepower (when new, it would’ve have a 2.3-liter engine). Only about 190 8C 2300s were built and very few were factory-build Monzas. This one should bring between $12,000,000-$15,000,000. Click here for more info and here for more from Gooding & Company.

The Alfa Romeo 8C was introduced in 1931. The first two years of production consisted of the 2300 model – the engine being a 2.3-liter straight-8 with a Roots supercharger good for more than 165 horsepower. This car was from the second year of production and was used as the third of Alfa Romeo’s three works entries for the 1932 24 Hours of Le Mans.

The car was piloted by the winners of the 1931 race – Henry “Tim” Birkin and Lord Earl Howe (they won in 1931 in a different 8C 2300). They placed 12th in this car in 1932 – a DNF due to a blown head gasket. After repair, it was run at the 1932 RAC Tourist Trophy race at Ards, Ulster, placing 4th (with Howe driving). Afterward, the car went back to Alfa Romeo and was sold to driver Giuseppe Campari, who sent the car to Carrozzeria Touring so they could turn it into a road-friendly Drophead Coupe.

It was then sold to Italo Balbo – a rising star in Mussolini’s fascist regime. He was to become the Marshal of the Italian Air Force and Governor of Libya before his plane was shot down in 1940 and he was killed. Before he died (actually in 1935) he sold the car. It passed through numerous owners until it was acquired by its current owner in 1996, who had the body re-configured back to a more appropriate Le Mans-style body.

The 8C is the big dog among pre-war Alfa Romeos – comparable to a “Blower” Bentley. And like the Bentley, they aren’t common and they aren’t cheap. This one, albeit with its impressive, known history, is estimated to sell for between $3,900,000-$6,200,000. For more information – including a mini-biography of Italo Balbo – click here. For the rest of the Bonhams auction lineup, click here.