Well apparently somethings don’t translate well from French to English. Perhaps “EX” isn’t the best trim level to add to a car called the 2300 S. At least there’s a space, right? Or is this just some romantic French thing?

Salmson is actually still around, though they haven’t produced a car since 1957 when they went bankrupt and Renault bought their factory. Today they’re an engineering firm that produces industrial products like hydraulic pumps. Exciting stuff.

Their last automotive hurrah was the 2300 Coupe. Built between 1953 and 1957, Salmson entered sporting versions of the car in the 24 Hours of Le Mans three separate times. They were powered by 2.3-liter inline-fours capable of 103 horsepower.

Only 217 examples of the 2300 were built, and only 121 of those were the Sport models, like the one you see here, which is eligible for such events as the historical Mille Miglia. It should sell for between $75,000-$95,000. Click here for more info and here for more from this sale. 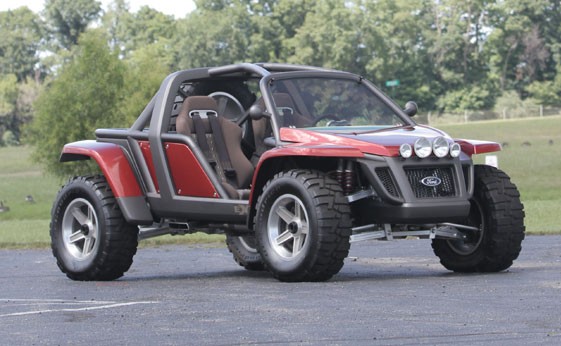 Well this is pretty cool, isn’t it? It’s a true concept car – you don’t recall Ford selling anything like this in the past 15 years, do you? It’s cool. It’s wild. It’s extreme.

This is actually a working, drivable concept car. It’s powered by a 4.0-liter V-6 making 375 horsepower and lots of torque. It’s four-wheel drive, obviously, and although they don’t quite look it, those are 33-inch tires. It resembles more of the modern side-by-side ATV than it does a production truck.

If Ford would’ve built this, they would have been off-road legends. Instead, there is just this one example. If go-anywhere is your thing, then this is your ute. It has to be massively entertaining with all that power, no real weight, and extreme off-road capability (although it’s a little rare to be thrashing it on the trails). In any event, it should sell for between $75,000-$100,000. Click here for more info and here for more from this sale.