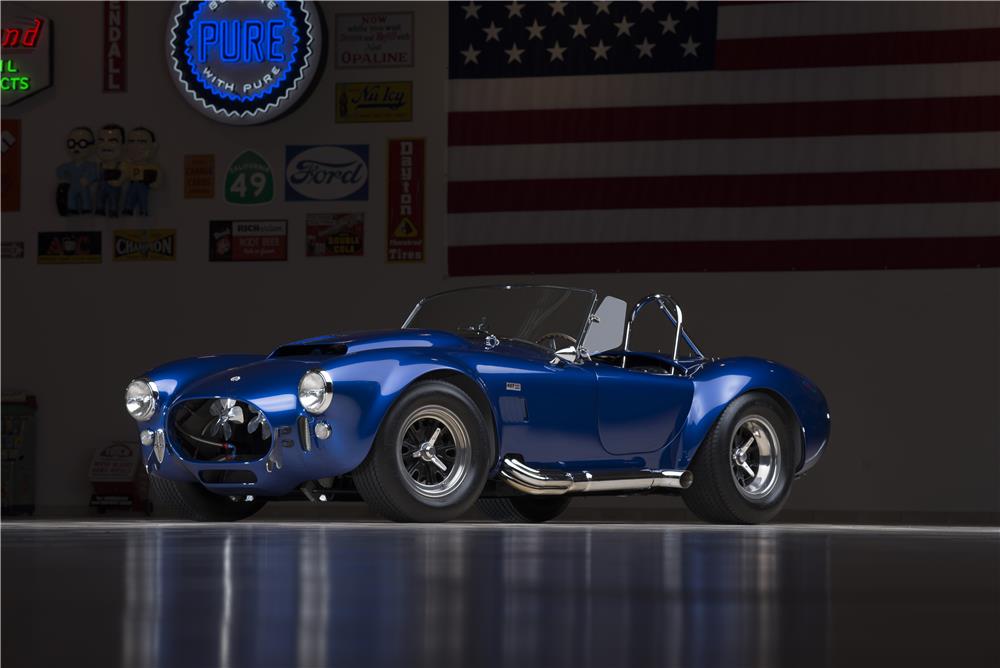 This car will be one of the stars of Barrett-Jackson’s 2015 Scottsdale auction. It comes from the collection of Ron Pratte and he famously bought it at Barrett-Jackson Scottsdale in 2007 for $5.5 million. What’s changed since that price was hammered down? Well, we lost Carroll Shelby. How about a little biblical history of this car:

Genesis: AC built a car called the Ace. It had a six-cylinder engine. Carroll Shelby stuffed a Ford V-8 under the hood. The Cobra was born.

Exodus: AC/Shelby built a limited run (23) Cobra 427 Competition models. Shelby converted one of these (this car) into the Super Snake – the Cobra to End All Cobras. It was a competition-spec Cobra made street-legal with the addition of bumpers and a windshield. They also supercharged the hell out of it.

Revelation: They built a second one for Bill Cosby who, appropriately, found it impossible to control and drive on the road. He gave it back. The next owner drove it off a cliff. Shelby retained this car most of his life. It’s the only one left.

The engine is a 427 (7.0-liter) V-8. It has two superchargers and puts out 800 horsepower. Ol’ Shel himself claims that the car will hit 60 mph in just over three seconds but I doubt there is any way you could possibly get the power down smoothly enough for it to happen. The top speed is still likely limited to 165 mph based on aerodynamics.

This is a fairly legendary car in both the auction world and the world of muscle cars. You can buy it this coming January, but you better have a big bank account. Click here for more info and here for more from this sale.

For 1967, Shelby added a bigger, more powerful Mustang to its current Mustang lineup, which consisted solely of the GT350. The new GT500 used the police interceptor engine – the 428 V8 (7.0-liters) rated at 355 horsepower. It was an immediate success and outsold the GT350 by almost 2 to 1.

This car is special. We’ll start with something I didn’t know: Carroll Shelby was the West Coast distributor for Goodyear in the late 1960s. Goodyear asked him to help showcase their new economy tire. It was to be an extended high-speed demonstration and Shelby decided to build a super GT500 for this task. They pulled a GT500 off the line and equipped it with a racing 427 – essentially the same engine that the GT40 ran at Le Mans. It put out about 600 horsepower.

Then it was equipped with the el cheapo-looking tires you see on it now and run for 500 miles at an impressive average of 142 mph (it topped out around 170!). The car was shipped to a Ford dealership in California afterward and the dealer wanted Shelby to build a run of these cars, but the price would have been exorbitant – being more expensive than the Cobra – and Shelby declined.

The car passed through various owners until the current owner acquired it and performed a “light restoration” – putting back into test mode (and finding a nearly impossible-to-find set of original skinny Goodyears – the same model used in the tire test). This is the only GT500 Super Snake built and it will bring considerably more than the $5,000 that drove it off the Ford lot in 1967. Click here for more and here for more from Mecum in Indy.