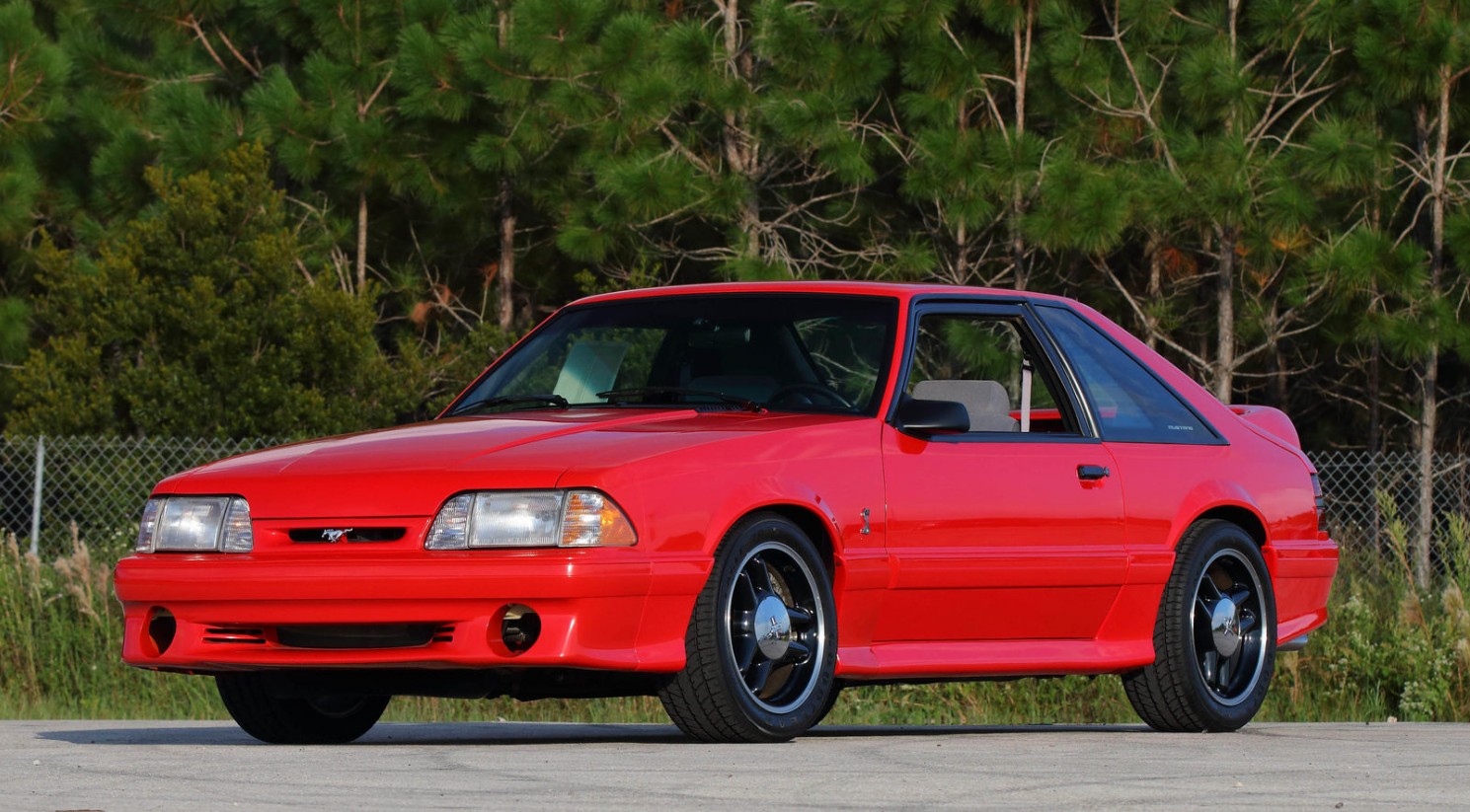 The first Mustang Cobra was produced by Ford’s Special Vehicle Team (SVT) in 1993. It was mostly a power upgrade and other mechanical bits that made the car faster. The early Cobras looked similar to the GT, and in 1993 they also built a very limited edition Cobra R, the “R” standing for “race.”

The engine was a 5.0-liter V-8 making 235 horsepower, same as in the standard Cobra. Top speed was 140 mph. But this had a laundry list of other items that made the car lighter, faster, and more robust. Only 107 of these were built, making it quite rare in Mustangland. This one has 1,400 original miles and the original window sticker. Click here for more info.

The fourth generation Mustang went on sale for the 1994 model year. The second-generation Cobra was built for 1994 and 1995 and they looked meaner than the standard GT. The Cobra R was again produced, this time for 1995 only and 250 would be made (and you had to have a valid racing license to buy one).

The engine is a 5.8-liter V-8 making an even 300 horsepower. The idea here was to essentially homologate the car for use in endurance racing. But with that bulging hood and lowered stance, this thing looks destined for the drag strip. The as-new price was $37,599 in 1995 making it, easily, the most expensive Mustang built to that point. This example has 1,900 original miles and you can find out more about it here. 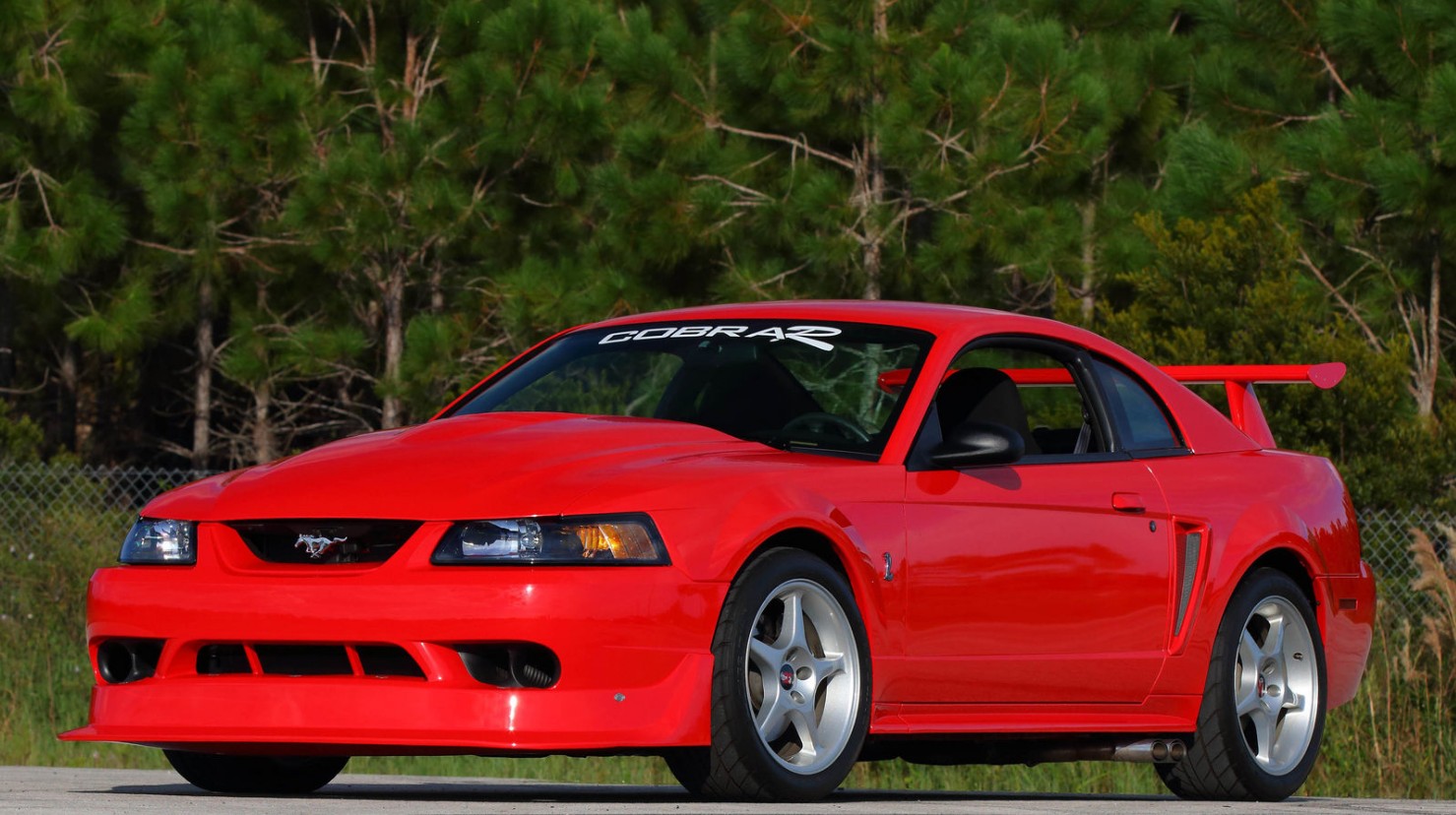 Unlike the previous Cobra Rs, the 2000 (and most recent example) was more of a departure, styling-wise, from the standard Mustang. This version had an aggressive body kit featuring a lip spoiler and a borderline-ridiculous rear wing. It even has side exhaust – when’s the last time you saw that on a production car costing less than 60 grand?

The powerplant beneath the hood here is a 385 horsepower, 5.4-liter V-8. Top speed was an impressive 177 mph and it was meant to be more of a track car than it was probably ever used for. Only 300 were made and when they came out, sporting something like an $55,000 MSRP, there was a dealership here in town that had three of them. I seem to recall them going for about $85,000 a pop. You can find out more about this 1,600 mile example here and see more from Mecum here.

Until the early 1990s, pickup trucks were utilitarian vehicles used by people to haul things and drive through less-than-glamorous areas. But then Ford and GM decided they could be sporty as well. GM introduced the 454SS in 1990 and the GMC Syclone followed the next year. Dodge offered a Shelby Dakota. Not wanting to be left out of this strange new game, Ford’s Special Vehicle Team stepped up to the plate in 1993 with the Lightning.

The first generation of the Lightning was made between 1993 and 1995 with 11,563 built. It has a 5.8-liter V8 making 240 horsepower. And it looked pretty much like a standard F-150, but with a few giveaway touches like sporty wheels, painted grille, and, on this particular truck, an exhaust exit in front of the rear tires.

The second generation Lightning would be even more extreme and sporty and you see them quite a bit more than these. Chevy 454SS trucks show up at auction almost regularly – but they always seem like just another used pickup. However, this Lightning looks pretty nice and it is rarer than its bow-tie competitor. It would be a lot of fun, just don’t ruin it by hauling stuff. For more information click here and to see the rest of the Salmon Brothers Collection, click here.