If you’ve haven’t been following the drama of SSC’s current Tuatara supercar we’ll fill you in: there was a video online in 2020 of the car purportedly breaking the 300-mph barrier. People called it bogus, and very recently SSC admitted it did not actually happen. The company’s first model was the Aero, which debuted in 2004. We featured the second one of those that was built before it was withdrawn from a previous auction.

The upped the Aero to the Ultimate Aero in 2005 and continued piling power on with 2007’s Ultimate Aero TT. This is the first of those built. It is powered by a twin-turbocharged 6.3-liter V8 that was rated at 1,183 horsepower. The top speed was 257 mph, which made it the fastest “production” car at the time.

Mecum notes that 24 were produced between 2006 and 2007. I’m not sure what model(s) that number covers, or even if it is true. Remember that they announced the Tuatara in 2011 but it is unclear if customer deliveries have begun as of 2021.

All that said, this is a pretty cool American supercar. It’s like a 21st Century Vector. It is expected to sell for between $600,000-$750,000. Click here for more info and here for more from this sale. 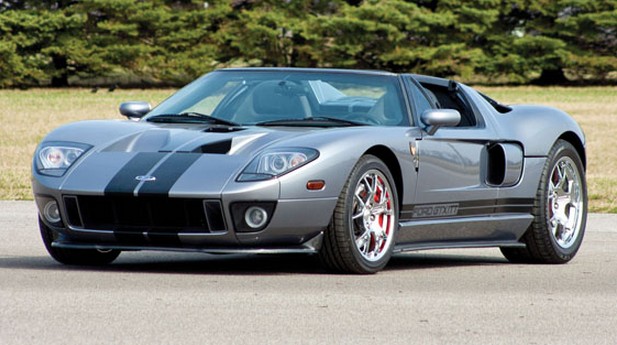 Ford GTs are hot right now. Like really hot. Try finding one for below $300,000. And with talk of a new GT on the way, they’re about at their peak. So why not roll in an even rarer version with gobs more power?

This is a GTX1, which is not an official factory designation. The GT was built between 2004 and 2006 with 4,038 built. The GTX1 was a concept car first shown at the 2005 SEMA Auto Show. It is special because it is a roadster. What makes supercars better? Why, chopping the top off of course.

The first GTX1 was built by Genaddi Design Group of Green Bay, Wisconsin. Ford commissioned them to build another 30 as a sort of aftermarket conversion. It’s an official car in that it appears in used car price guides and they are listed with the Shelby American Automobile Club.

The base GT uses a 5.4-liter supercharged V-8 – but this car has been turbocharged to put out over 1,000 horsepower, hence the “TT” in the car’s name. GTX1s were built between 2005 and 2008 out of original GTs. Does it’s limited production make it more or less valuable than a standard GT? We’ll see: this one is expected to bring between $300,000-$350,000. Click here for more info and here for more from this sale.