Edouard Ballot got his start building engines. He even worked with Ettore Bugatti early in Bugatti’s career. Maurice Ballot later joined his brother, and Etablissements Ballot SA was formed in 1910. Engines were their main business until 1919 when they started building cars.

The company went racing right off the bat, competing in the 1919 Indy 500, as well as the Targa Florio, French Grand Prix, and more. More luxury-oriented cars followed, including the 1927 Type RH, which became the RH3 in 1929. The engine is a 3.0-liter inline-eight. This one was sold new in Marseilles and carries a fabric sedan body, which may be from Weymann.

Ballots are around but aren’t very common – especially those with big engines and nice coachwork. This example should sell for between $70,000-$90,000. Click here for more info and here for more from this sale. 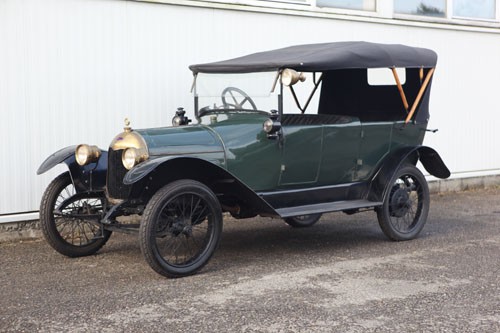 French auction house Osenat held a sale of automobilia, motorcycles and cars at the Chateau de Fontainebleau just outside Paris. The Top sale was a 1934 Rolls-Royce 25HP Fernandez & Darrin Convertible with a storied history that sold for about $263,000.

While the above Rolls-Royce was far and away the top seller, there were quite a few interesting lots – especially to someone on this side of the pond. The second top seller was a 1900 De Dion-Bouton Type E Vis-a-Vis with 3.5 horsepower and a seating configuration that would confuse me immediately upon entering the vehicle. It brought $89,000.

While there were quite a few very interesting cars that did not sell, there were will many that did, beginning with this 1923 Rolland-Pilain Type RP, a little known company that produced only about 5,000 cars from 1905 until 1932. This one definitely needed some work and was presented in barn-find like condition but it still managed $26,300.

Then there is this: a Willys army Jeep manufactured in France under license by Hotchkiss.  This 1962 Hotchkiss M201 looks just like the thousands of US military Jeeps that trundled around the French coast and countryside back in the 1940s. About 27,000 were produced and this one cost a bidder $13,100.

The 1929 Ballot RH3 (below) had known ownership history from new – including a period of time when the car was abandoned at a hotel near Lyon. It’s an 8-cylinder car with respectable performance and it sold for $63,900.

And finally, another Jeep. This one was began life as a Citroen 2CV but was converted into a sort of replica-Jeep by the Martinez Brothers. The lot description lists it as a 1967 Citroen Mini Jeep MF (the “MF” standing for Martinez Brothers, but in French). It was aimed at the Mini Moke and less than 40 were built. It sold for $13,100.