Here’s another rule-breaker (kind of, more on that in a minute). Introduced in 2016, the Regera was designed to be more practical and luxurious than its sister car, the Agera, which was built from 2011 through 2018.

So what does the Regera bring to the table? How about a twin-turbocharged 5.0-liter V8 combined with three electric motors for a combined system output of 1,500 horsepower? the car has active aero, carbon fiber wheels, a fixed-gear direct-drive transmission, and, of course, dihedral doors. It has an electronically limited top speed of 251 mph. Sixty is gone in 2.8 seconds. It can hit 249 mph in 22.8 seconds. And this is their grand touring car.

Koenigsegg planned to build just 80 examples of the Regera, and as of the end of 2020, they have apparently all been built. So there we go, it’s technically out of production. Interestingly, this is the 175th Koenigsegg car built – talk about low volume. It was delivered new to a dealer in Illinois, has over $215,000 in options, and is the first Regera to hit the public auction block.

The Agera was Koenigsegg’s second model, a follow up to the long-lived CC line of cars. It was introduced in 2011, and production started the following year on the Agera R, which was an updated version of the brand-new model. It lasted through 2014, although other versions of the Agera remained in production through 2018.

The R is powered by a twin-turbocharged 5.0-liter V8 that was tuned to produce 1,124 horsepower. That power figure is attained on running E85. On regular pump gas, power drops to just 947 horsepower. The car can hit 60 mph in 2.8 seconds and is supposedly capable of 273 mph.

Only 18 examples of the Agera R were built. This particular car is one of two finished in blue carbon fiber. And it’s the first car I’ve seen with an estimate of $2,000,000-$2,500,000 to make note of its Carfax report in the auction catalog. Click here for more info and here for more from this sale.

Koenigsegg does this thing where they design a car and then keep iterating on it and giving each new version a distinct name. The Agera was introduced in 2011 as the successor to the CC/CCX line of cars. And the Agera kind of just looked like a development of the earlier car.

The Agera and its associated line of spin-off models lasted through 2018 and included this, the One:1, which is so-named due to its remarkable power-to-weight ratio of one metric horsepower per kilogram. The twin-turbocharged 5.0-liter V8 makes 1,341 horsepower. Only six were built between 2014 and 2016.

This particular car – as with many of the other exotics in this sale – was owned by the vice-president of Equatorial Guinea (who also happened to be the son of the sitting president). His cars were seized by the Swiss government after he was found guilty of embezzlement. He has a pretty terrible rap sheet of financial crimes and sounds like a real, great overall dude. This car cost $2,850,000 when new and now is expected to bring $1,800,000-$2,300,000. Click here for more info and here for more from this sale. Proceeds go toward social programs in Equatorial Guinea, where perhaps the money should’ve been spent in the first place. 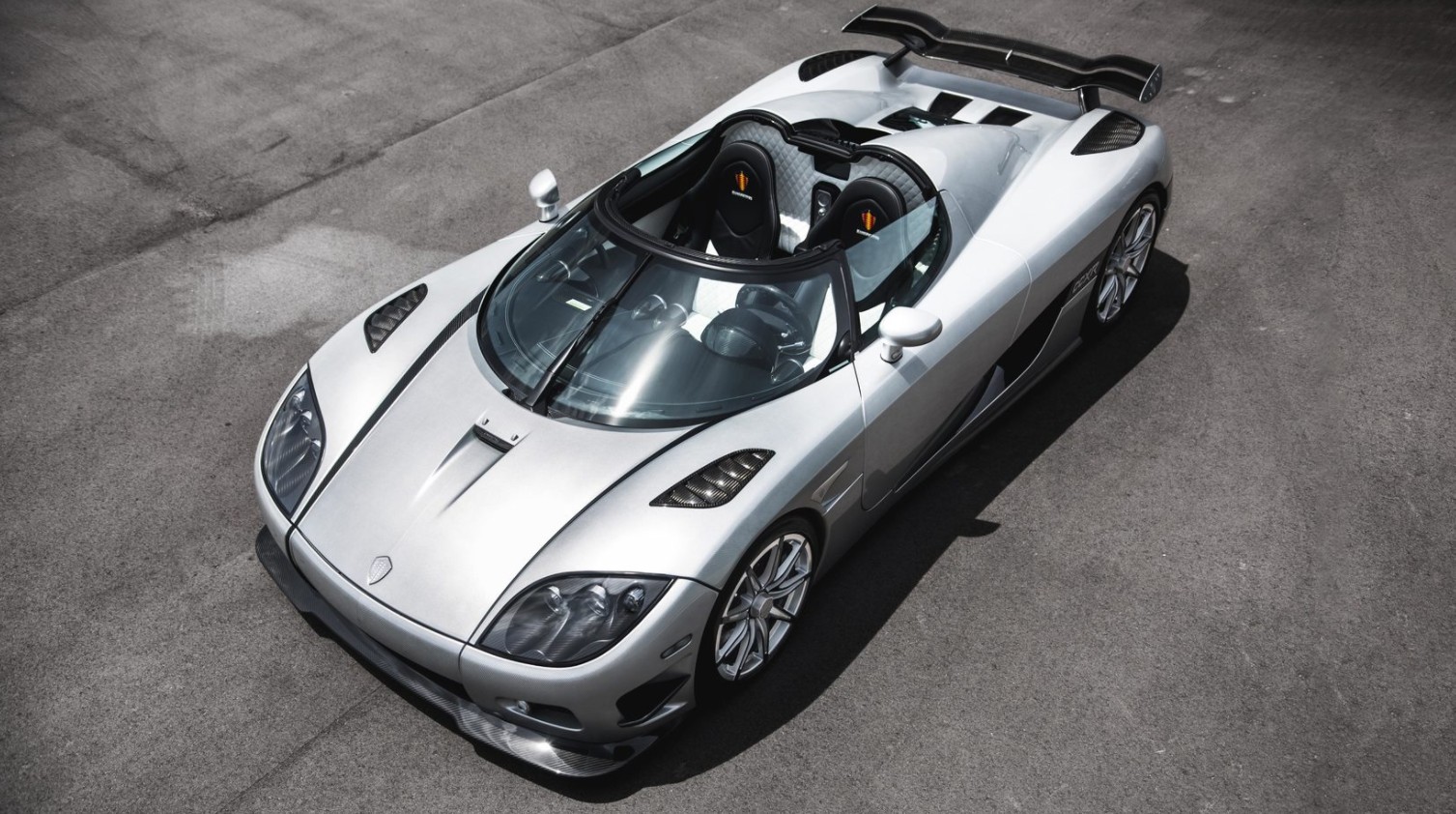 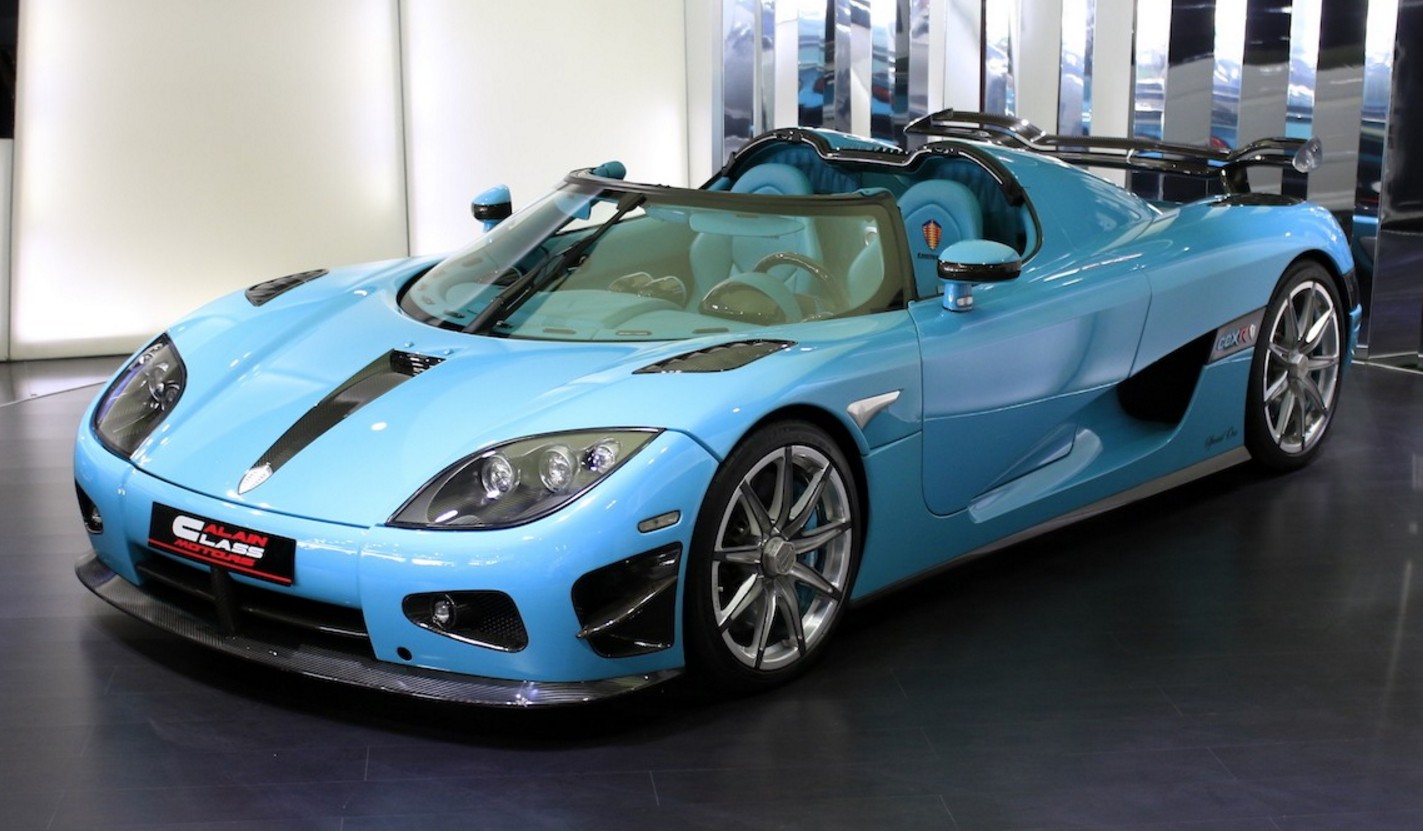 Can we just state the obvious here and say that this car is just plain beautiful. I can see how some people might say that it’s garish, but supercars are supposed to be gaudy to some degree. This thing – from the design, to the beautiful blue color and carbon fiber accents, to the wheels, to the missing roof, to the big spoiler – it is just perfect. It’s almost unreal, looking more like a made up supercar from a video game than something you’d actually see on the road. But I think that’s the point.

The Koenigsegg CCX (and its derivatives) were on sale between 2006 and 2010. The CCXR was the “eco” model of the CCX. Eco is kind of misleading: it can run on E85 or “standard” 98 octane fuel. The engine is a twin-supercharged 4.7-liter V-8 that, when fueled with an ethanol blend, will pump out a ludicrous 1,018 horsepower. Top speed is listed as “in excess of 250 mph” and 60 arrives in just 3.1 seconds. Only a handful of cars ever built can attain this kind of performance.

Only 48 CCXs were built of all types. This car is a standard CCXR (not one of the two Special Edition cars) but it is a one off in its features and color and name. There is a roof should you find it necessary to drive it in the rain. It was built for a member of the royal family of Qatar but was road registered in London at one point and is now for sale in Dubai. You’ll need to inquire here for price.

Boom. The top speed of the car we featured yesterday was 15 mph. This car will do 245 mph. Yeah, that’s a McLaren F1 difference in top speed (they topped out at 231 with the rev limiter). This is one of the finest and fastest legitimate modern supercars in existence.

Christian von Koenigsegg’s first hand built road car was delivered to its new owner in 2002. The CCX model you see here was introduced for 2006 with an eye toward entering the American market (with emissions compliance, etc.). It uses a Koenigsegg-designed twin-supercharged 4.7-liter V8 making 806 horsepower with 62 mph coming in a scant 3.2 seconds.

The top on this car is removable and can be stowed in the trunk at the front of the car – it fits in there just perfectly and is a really neat design feature. Even neater are the doors: they are not gullwing doors nor are they “Lambo” scissor doors. They are what Koenigsegg refers to as “dihedral synchro-helix” doors. In other words, instead of just flipping forward, they go out, then rotate forward for a truly alien look. Coolest. Doors. Ever.

It’s a quick car – and that small spoiler on the back helps keep it planted. It exists thanks to Top Gear, which tested the first CCX (and it had an “off” into some tires when their test driver, The Stig, lost it at high speed). The wing was introduced and the car topped their lap chart, although the time was, jokingly, credited to “KoenigseggisseggggnignigsegigisegggnigseggniggseggCCX with Top Gear wing.”