Alfa Romeo may not be crushing it in the U.S. right now, but this car is proof that they can still put out some stunners, despite what the sales numbers show. To be fair, in this car’s case, they only built 500 of them, with orders for almost triple that.

Styling was done in-house at Alfa and was supposed to invoke the company’s classic models of the 1950s and ’60s. It’s a success. It took its name from the 1930s 8C, Alfa’s pre-war masterpiece. The car is powered by a Ferrari/Maserati 4.7-liter V8 that was rated at 444 horsepower. And it sounds amazing.

Colors were all over the board, but most appear to have been finished in red. It still looks good in black, and pretty much any other color you could lather it in. Bidding is already at $175,000. Click here for more info.

ETV is an acronym for Extra-Terrestrial Vehicle, and this car was built by Mike Vetter of MTV Concepts in some altered state of mind, somewhere in the US. It looks like something from Minority Report.

It has batwing-style doors, two a 2+2 seating arrangement, and some wild styling. The big scoops behind the doors are a little misleading because this thing is front-engined. That’s right, a 1.6-liter inline-four from a Chevrolet Aveo is stuffed up front under the dashboard.

I have no idea what is in back or how you even get to the tiny rear seats. The photos aren’t much help. Apparently it has front and rear parking cameras and an air ride suspension – neither of which work because it’s been on museum display for some time.

A quick search will return a few photos of the ETV in different colors, which would lead you to believe there are a couple of them out there. This one is expected to sell for between $11,000-$17,000. Click here for more info and here for more from this sale.

Roland Gumpert previously worked for Audi Sport and founded his own company in Germany in 2004. The next year the company launched the Apollo supercar. Production would continue until Gumpert’s bankruptcy in 2013. In 2016, the remnants of the company were acquired by a business out of Hong Kong that also owns the rights to the De Tomaso brand. Apollo Automobil (the new company) can offer parts assistance for exiting Apollos and are working on their own new models.

The Apollo is powered by an Audi-sourced twin-turbocharged 4.2-liter V8 rated at 641 horsepower. This was the base model, and it would do 223 mph and 60 in 3.1 seconds. Two more-powerful variants were also offered. This particular car was used as a factory demonstrator and was sold new in Italy. At a 2013 track day at Monza, it experienced a rear-wheel hub failure and crashed into the pit wall. Unfortunately this coincided with Gumpert’s bankruptcy, so the car was unable to be repaired at that time.

But once Apollo Automobil sprang up, a complete overhaul (RM calls it a “restoration”) was performed, wrapping in 2017. This is the 20th Apollo built, although I have no idea how many were built in total (it’s at least 40). You can see more about this one here, and more from RM here.

Toyota competed as a constructor in Formula One between 2002 and 2009. And it did not go well. Despite dumping an untold fortune into the endeavor, they never won a race. They finished second five times, however, including once in 2008 using a TF108 chassis.

Not this chassis, though, because it is an engine-less show car. It was the fifth TF108 chassis built and, had it been a race car, it would’ve been powered by a 2.4-liter V8. Toyota’s 2008 drivers were Timo Glock and Jarno Trulli.

This show car is from Toyota’s penultimate year in F1 and would be a cool piece in any collection. It would also make for a great simulator base. It is expected to fetch between $67,000-$89,000. Click here for more info and here for more from this sale.

A silver Spyker with an orange leather interior. Yep. I’ll take two. The Laviolette version of Spyker’s C8 was introduced in 2001, a year after the original Spyder was released. What differentiated the cars were their roofs.

The Laviolette features a fixed roof with a built-in air intake to feed the rear-mounted 4.2-liter Audi V8. Power was rated at 395 horsepower. The original short-wheelbase Laviolette was produced up until 2009, and this is one of the final examples of the model.

It was also an ex-factory demonstrator. With three owners since new, including Spyker themselves, this one will hopefully find a new home at RM’s Paris sale. More info can be found here, and more from this sale is available here. Also, just because it is so damned pretty, the interior of this car: 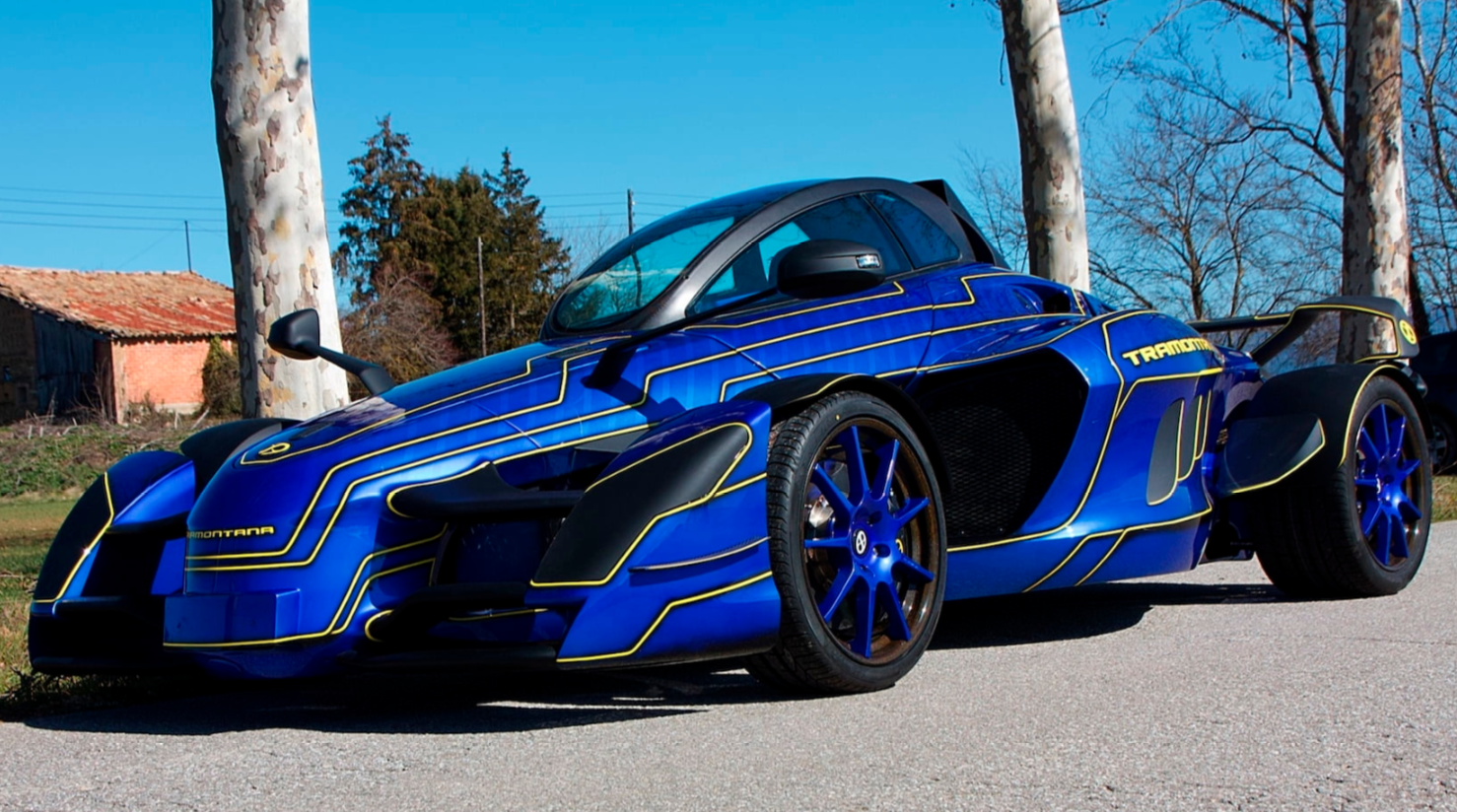 This car is proof of two things. First, that it actually exists, as it certainly falls into the category of cars whose actual production seems dubious at best. But here it is! And second, it’s proof that marketing departments write Wikipedia pages (I know, I’ve been a part of a team doing it). Why? Well, the contradictory Wiki article for Tramontana says they built 12 of these per year. Mecum says this is one of eight built, which sounds much more accurate.

The Tramontana was built in Spain and debuted at the 2005 Geneva Motor Show. Production started in 2007, and this is a 2008 GT model. There were later R and XTR variants. Production has wrapped and they’ve moved on to another model altogether (supposedly).

When I first saw this I thought it was a kit car based on a 4-wheeler, probably powered by a turbo four or even an LS V8. But no, this incredibly ridiculous car featuring two seats – one behind the other – is powered by a twin-turbocharged 5.5-liter V12…! The styling is supposed to be a combo of F1 car and jet fighter, and it sort of succeeds in that endeavor. I just hope that the car has been wrapped and that is not the actual paint job.

Performance numbers are absolutely supercar territory –  888 horsepower propels it to 60 mph in 2.8 seconds on the way to a 217 mph top end. It’s a legitimate, badass, low-run supercar from Spain, though I’m not sure about its road-legality in the U.S. (might be a “Show and Display” car). It deserves big bucks at Mecum next month. Click here for more info and here for more from this sale. 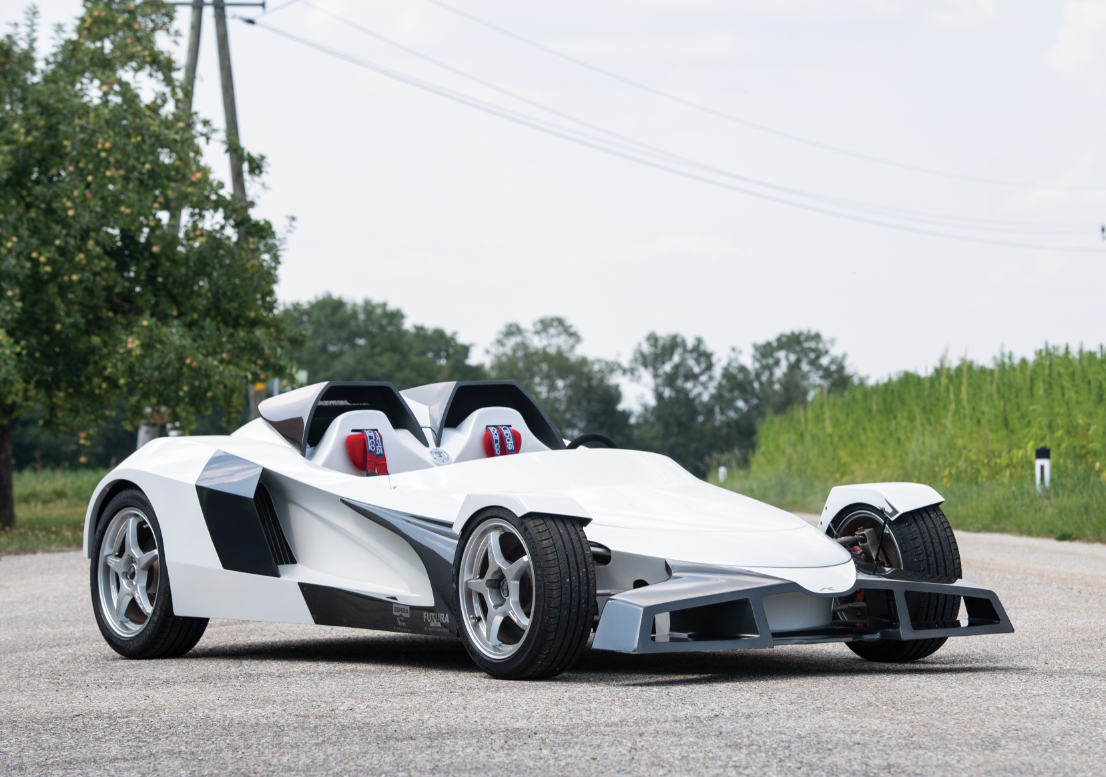 Franco Sbarro’s automotive design school is located in Belfort, France, and has been responsible for some pretty wild concept cars. Basically, you go to design school and your final class project is to build a car that Sbarro takes to the Geneva Motor Show.

This was built by the class of 2007-2008, and here was the car from the year before. This one is powered by a V6 from Peugeot and has no top, no windshield, and no rear-view mirrors. It could be a great track toy or, if you’re European, eventually road-registered with enough effort. Design cues range from hot rod, to F1 car, to KTM X-Bow, to Plymouth Prowler, to Polaris Slingshot. And this car pre-dates two of those. 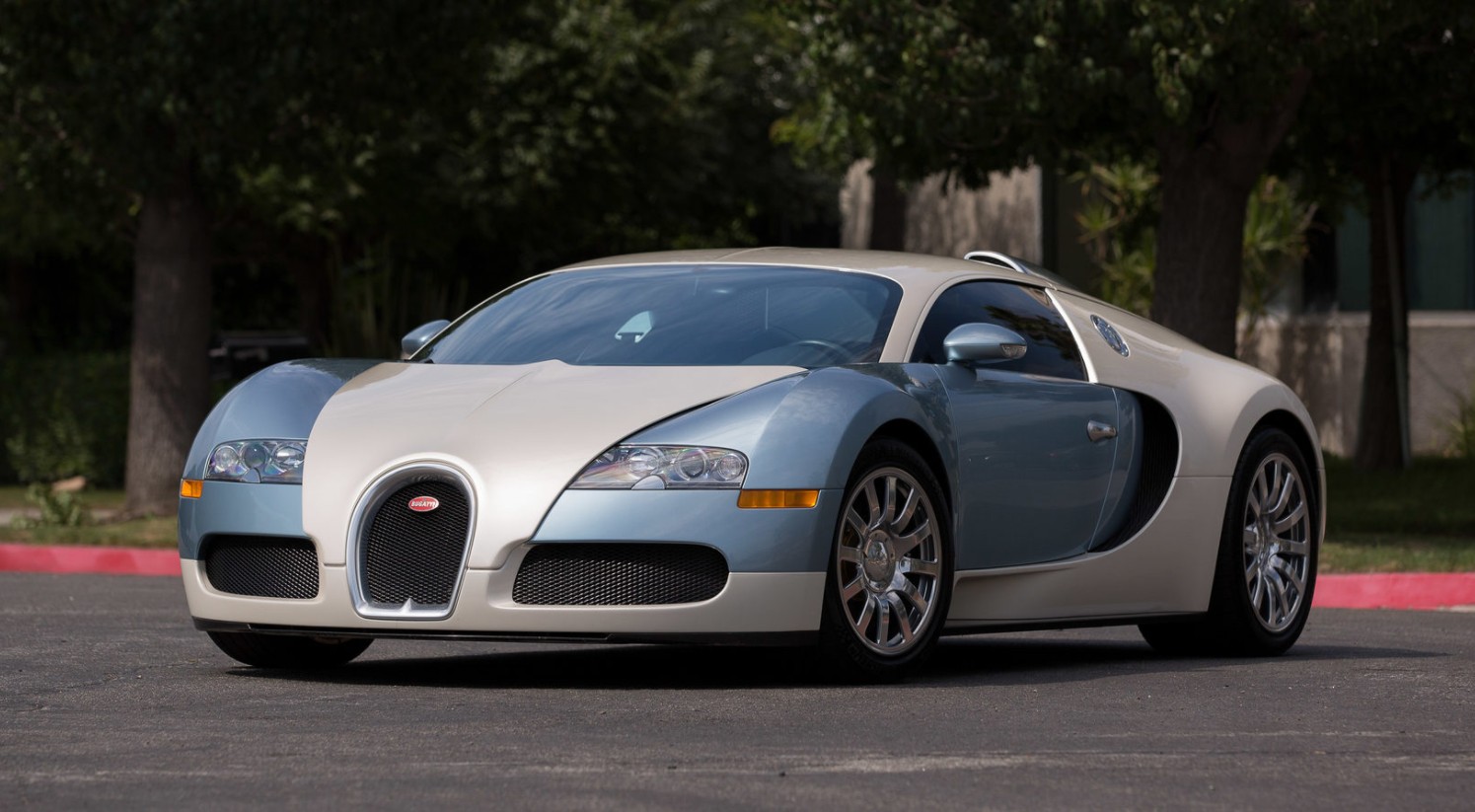 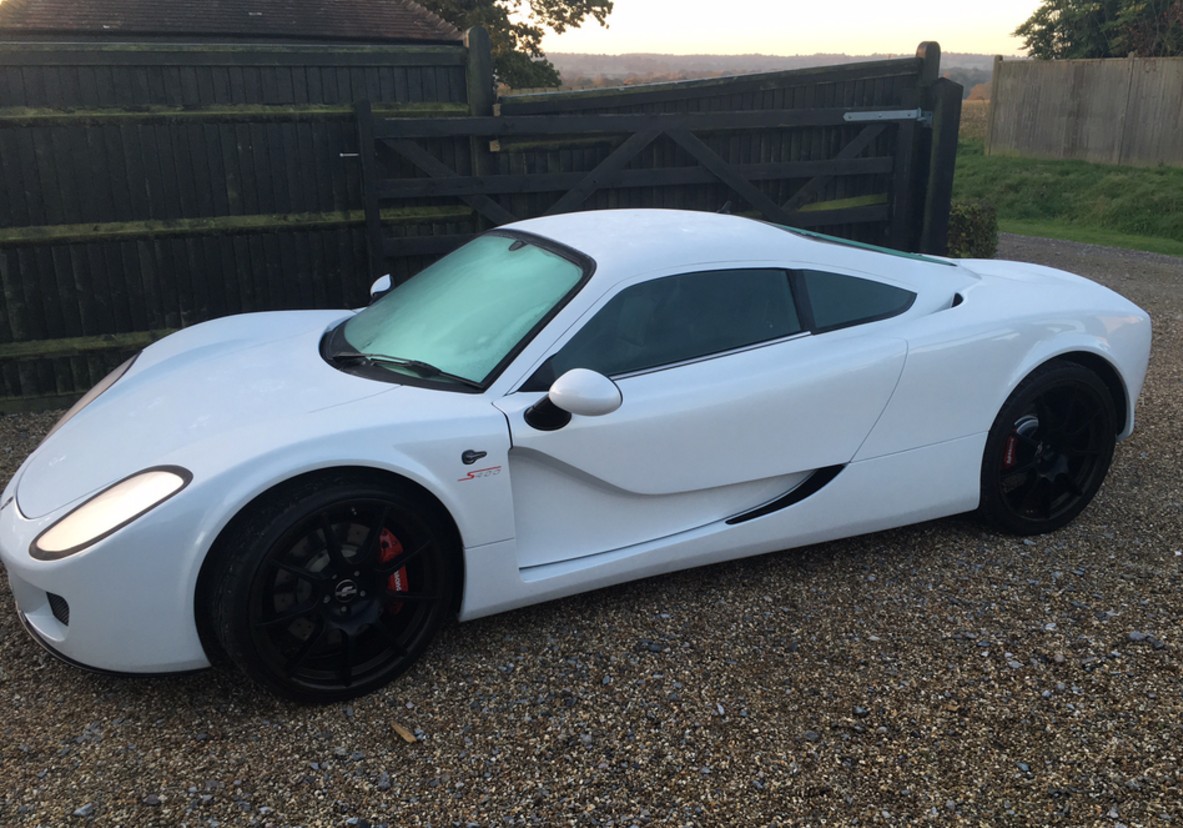 The Arash Motor Company was founded by Arash and Ahmad Farboud in 1999. In 2003, they designed and built a car called the Farboud GTS. They only built three cars before they sold the rights to a company called Farbio. From 2007 through 2010 Farbio built the GTS under their own name in three different sub-models.

This was the only GTS400 ever built by Farbio and they only built a handful of the other two models. In 2010 production stopped and Ginetta bought out Farbio. Ginetta built the car in 2011 as the F400 before slightly redesigning it and re-launching it in 2012 as the G60. This car should bring between $76,000-$89,500. Click here for more info and here for more from this sale.

Al Melling worked at TVR and was responsible for co-designing the TVR-produced engine that was used in the Cerbera. His work spread across to motorcycles, Formula One, and other supercar manufacturers. He set up a shop in Rochdale, England, called Al Melling Sports Cars to produce this, the Wildcat.

It looks like something that would’ve come out of England, specifically like something from TVR or Marcos. This was the first example built and it is powered by a 5.7-liter Chevrolet V-8 tuned to make 450 horsepower (other engines are an option if you buy one new). Top speed is 180 mph and 60 arrives in just 3.5 seconds.

As of 2014, only seven Wildcats had been produced, with this being the first, the Prototype (which was assembled in just nine months). The car has been in the Melling family since it was built and they are the ones offering it for sale here. Click here for more info and here for more from Coys.