The Tipo 256 is a very rare pre-war Alfa based on the 6C 2500. It was a racing car that was introduced in 1939. A few things differentiate the 256 from other racing variants of the 6C, one of them being that the Tipo 256 was actually prepared by Scuderia Ferrari in Modena, and not by Alfa themselves.

Power is from a 125 horsepower, 2.5-liter inline-six. Other features include a shortened frame, larger fuel tank, lowered radiator, three Weber carburetors, and a stiffer suspension. This car was originally built as a Spider Siluro and it’s competition history includes:

It competed in a number of other Italian road races in 1939 and 1940, when production of the 256 ceased. In all, it is believed that 20 examples were built. This one, like at least a few others, was re-bodied after its racing career ended. This Touring body you see above was fitted in 1941.

It remained in Italian hands until coming to Washington state in 2012. This marks the first time this chassis has ever been offered for public sale, and it is expected to fetch between $2,750,000-$3,500,000. Click here for more info and here for more from this sale. 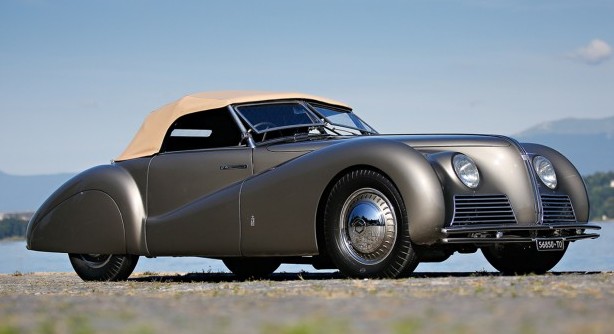 The Alfa Romeo Tipo 256 was actually a racing car, despite the svelte body you see here. It was developed as a racing version of the 6C 2500 by Scuderia Ferrari. It has a shortened frame, huge fuel tank, and stiffer suspension.

The engine is a 2.5-liter straight-six making 125 horsepower – 35 more than the standard 6C 2500. Alfa raced these cars in the Mille Miglia and at Le Mans. It was the last race car Alfa built before WWII.

This car began life as a racing car, but when war broke out, most racing was suspended and many of the Tipo 256s were re-bodied. This one went to Pinin Farina in 1940. Later that year, this very car was sold to Piero Dusio – race car driver and future founder of Cisitalia.

It was restored (or refinished, depending on how you see it) in 2008 which consisted mostly of a new top and new paint. The interior is original. This is one of between eight and 20 Tipo 256s built and it is the only one that looks like this wonderful Cabriolet Sportivo by Pinin Farina. It will likely sell for between $5,000,000-$7,000,000. Click here for more info and here for the rest of Gooding & Company’s lineup.