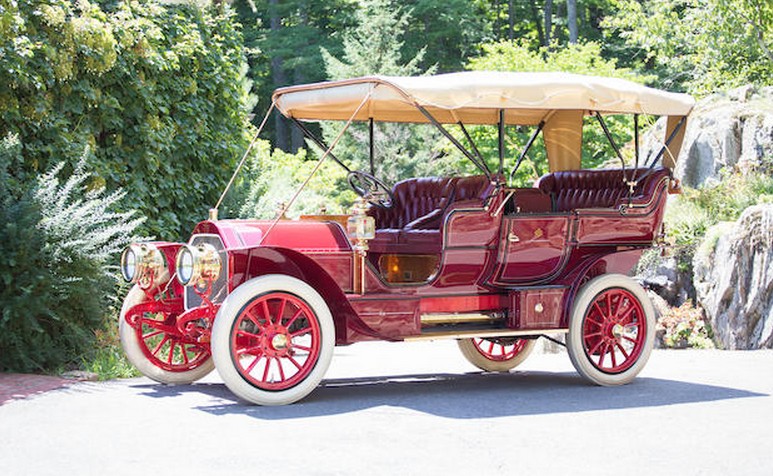 I guess it’s no surprise who owned these things then. Kaiser Wilhelm II bought two of them. This one was bought new by August Anheuser-Busch Sr. This is the short-chassis version. The engine is a whopping 10.6-liter straight-four (two pairs of two) making, well, 60 horsepower. It idles at 70 rpm! You can count each turn of the engine.

The car was delivered to the sole FIAT importer – in New York City – and then it was shipped to Newark, New Jersey, where J.M. Quinby & Co. applied this five-passenger touring body to it. It’s aluminium over wood with brass fittings. The price for the body? $4,000. Busch kept it for 30 years until his death and then the car started passing through hands of collectors, being acquired in 1973 by Louis Biondi of Connecticut who owned it until he passed away in 2012. The current owner had the car returned to running order. Other than that, it is entirely original.

Early, big horsepower cars like this are almost impossible to come by. This is the only example like this in existence (of about 20 produced, according to the lot description, which is possibly referring to the first generation of this model line – 1904/1905). The 60HP model was produced until 1909 and there were probably more made – as in an additional 66 over the final four years.

At any rate, this car is unbelievable. It is almost 110 years old and is entirely original and it runs and looks fantastic. Not to mention it is one of the most desirable early cars – restored or not. A huge opportunity. The price? No idea, as it is “estimate upon request.” Click here for more info and here for more from this sale.