The Simca 8 was a family car built by Simca in France between 1937 and 1951. It was offered in a variety of body styles and two engines were offered, one before 1949 and a slightly larger one after 1949. This 1949 car originally featured a race-prepped version of the earlier, 1.1-liter straight-four.

It was originally a road car, but was transformed into a racing barquette by a racing driver in 1950. The body was built in aluminium by Motto, an Italian coachbuilder. Once race-ready, the owner promptly registered it for the road! It was entered for the 1951 24 Hours of Le Mans but never showed up, though it did compete in some other French sports car races in the early 1950s.

Discovered again after 2000, it was restored and the engine was redone and enlarged to 1.2-liters. It’s just destined for the historic circuit with its new owner. It’ll likely bring between $275,000-$335,000. Click here for more info. 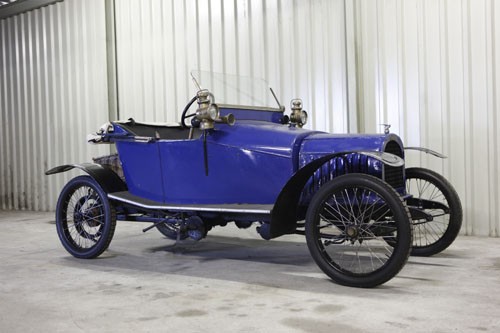 I love it when fine examples of short-lived automobile manufacturers survive for 100 years. This Warne 8 cyclecar is 100 years old. The company, Pearsall-Warne Ltd, was founded in Letchworth in 1913. It only lasted through 1915.

Light cars were all the rage in that day. A lot of companies popped up and built cars of varying quality with varying success. Warne may not have had a lot of success, but they had quality down. The engine is an eight horsepower 1.0-liter V-twin from J.A.P. and the price was a crazy-low-sounding £99!

The car is simple, yes, but it does have a convertible top, lights and it is belt-driven (for weight reasons). I don’t know how many were made in total, but it is said the company built six of them a week. This is car #57. You can read more here and check out more from Coys here.

There is a fabulous collection of Hudsons at this year’s Auburn Spring Sale from Auctions America. There are two 1950 Commodore 8 Convertibles, and while the other one is in nicer, brand-new condition, I think the color combo on this one is more attractive. Plus the photos are better.

The third generation of the Hudson Commodore was introduced for the 1948 model year. This generation is one of my favorite American car designs of all time. Their final year was 1952. Engine options were a straight-six or a straight-eight, as found in this car. It is 4.2-liters and makes 128 horsepower.

The convertible was a nice style – as all two-door Commodores are super-sporty looking, sharing styling cues from the Hornet, which had been honing its skills on the NASCAR circuit. This is an all-original car with 71,000 miles and three-on-the-tree. The fender skirts are what sets it apart – to me at least. And the wire wheels are off a Chrysler (and I’m not sure why). This is a $30,000-$45,000 car. Click here for more info and here for more from this sale.

The Standard Flying Eight began production in 1938 and crept along until 1941 when the Standard Motor Company focused on building de Havilland Mosquitoes for the RAF. Production of the Eight restarted in 1945 without the “Flying” part of the name.

Just about everything carried over from the pre-war model, including the 28 horsepower 1.0 liter straight-four. The only new feature was the four-speed gearbox, up one gear from the pre-war model. The car was phased out in 1948 to make way for its replacement – the Triumph Mayflower. In total, 53,099 Eights were built between 1945 and 1948, including two-door, convertible and estate body styles.

The model on offer here shows quite nice and, for whatever reason, has the pre-war three-speed transmission. Cute sells, but the Standard name is not well-known in America, however, this would be a fun car to pick up for less than $20,000. For the complete catalog description, click here. And to see the other cars Barrett-Jackson has for sale in Palm Beach, click here.