The Plymouth Barracuda was only built between 1964 and 1974, but it stands among the best muscle cars of the era. While Hemi ‘Cudas and Hemi ‘Cuda convertibles are certainly cool, the AAR is really, really cool. And so is its corporate cousin: the Dodge Challenger T/A.

What it amounted to was essentially an option package. It was supposed to be a street version of the ‘Cuda Trans-Am racing car that was campaigned by Dan Gurney’s All American Racers, hence the AAR designation. They were all powered by 5.6-liter (340) V8s equipped with the “Six Pack” of three two-barrel carburetors. Output was rated at 290 horsepower.

Only available in 1970, the cars could be had in a variety of wild colors, and all of them had a flat black hood and side graphics. This one is finished in Moulin Rouge. Only 2,724 examples were built in a two-month production run. Mecum has a rare estimate on this one: $60,000-$70,000. Click here for more info and here for more from Mecum in Indy. 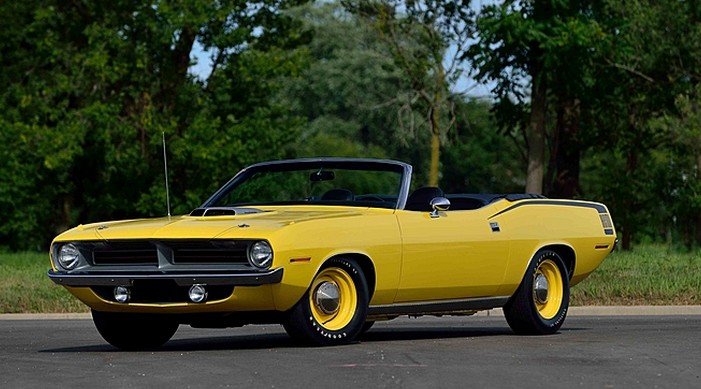 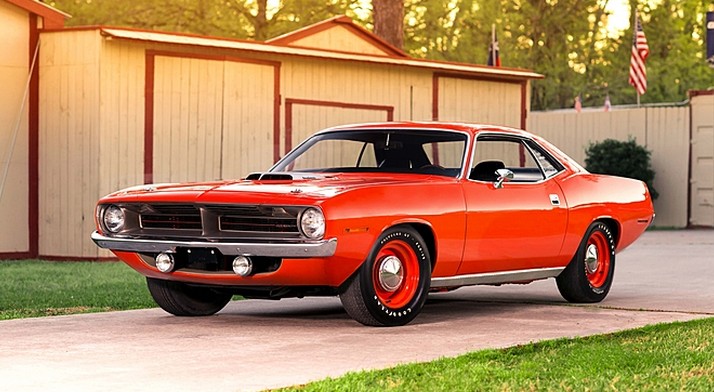 When people make “re-creation” or “clone” or “tribute” cars, they usually start with a run-of-the-mill car – a V6 or a base V8 engine and base or mid-level trim. Then they go to the Mopar catalog and order a Hemi crate engine and stuff it under the hood. It’s not desirable. It might be fun to drive or show your friends, but it just cheapens the real thing.

But this is the real thing and boy is it pretty. It’s the only Plum Crazy Hemi ‘Cuda Convertible (it is the original factory color and, in my opinion, the best). This is one of two  that were built for Canadian export. And it’s got that magical 7.0-liter 427 Hemi under the shaker hood.

These don’t come up for sale very often – obviously, there’s only 11 of them. One sold for $2 million a few years ago and, while a little extreme, that was the going rate – a few years ago. This is not a $2 million car today – even though any Barrett-Jackson employee near a microphone during the car’s sale will surely be telling you otherwise. This will undoubtedly be one of the top sellers of the auction. Read more here and check out more from Barrett-Jackson in Scottsdale, here. If this car looks familiar to you, then I am glad to say we share similar taste in 1990s primetime television cop shows. This was one of five ‘Cudas prepared for the CBS series Nash Bridges starring Don Johnson. Of the five built, it was the one personally retained by Johnson after production wrapped in 2001. He sold the car at Barrett-Jackson in 2003, where it was purchased by the current owner.

But that’s another story. This car is actually equipped with a 340 V8 (5.6 liter) and it’s a 1970. It was one of 64 convertibles built for the Canadian market in 1970. It’s also an automatic – Don Johnson couldn’t be expected to drive, carry on a scripted conversation, take direction from a camera car, and shift, could he? In fact, Johnson did much of his own driving on the series, particularly when doing a dialogue scene and driving through San Francisco (and never hitting a red light!). Apparently, this took a lot of skill – keeping appropriate pace with the camera car and being able to be heard over wind and engine noise. Yes, I’ve watched DVD commentaries of Nash Bridges.

I remember this car selling in 2003 for almost $150,000. Part of me just can’t imagine it bringing that much now. You could probably get a real Hemi coupe for close to that price. The muscle car bubble did burst, despite what certain places will tell you. This is not a $150,000 car. Don’t get me wrong, I want it – bad. But I’m a gigantic fan of the show and Nash Bridges’ ‘Cuda is a car I’ve loved from first sight. You’d really have to love the show to pay more than double what this car is worth, were it any other 340 ‘Cuda Convertible.

More info on the lot car be found here. More on the auction here.