The Grifo GL is a Bertone-styled Italian muscle car. It was designed by Giotto Bizzarrini and styled by Giorgetto Giugiaro. It was introduced in 1963, and a racing variant, the Grifo A3/C, debuted alongside

The grand touring Grifo was slightly restyled before entering production as the Grifo GL. Meanwhile, Bizzarrini got irritated, took the A3/C, and went and produced it as the Bizzarrini 5300 GT.

The Grifo GL road car soldiered on under the Iso marque. Early examples were powered by 5.4-liter V8 from a 327 Corvette that made 350 horsepower. That’s what this car originally had. But later Grifos received a 7.0-liter Corvette 427 V8 advertised at 435 horsepower. It’s what this car currently has under that mean hood with a very serious-looking vent.

This car received a six-digit restoration in 2005 and is now offered at no reserve. Check out more about it here and more from RM here. 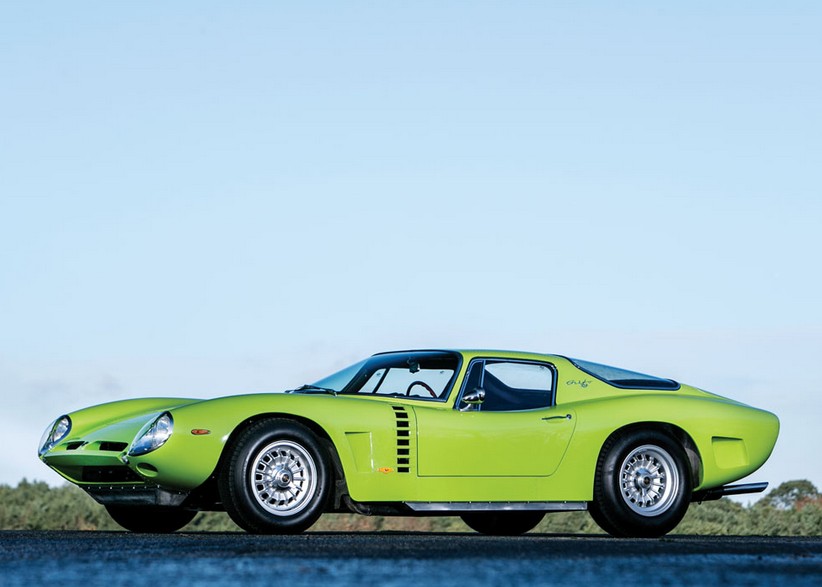 Gooding & Company’s Scottsdale auction featured some major cars selling for some major cash – $39,833,900 all told. It was also one of the more successful auctions in recent memory, with only two cars going unsold for not meeting their reserves. Top sale at this auction was a 1955 Mercedes-Benz 300SL Alloy Gullwing. Mercedes-Benz built 29 aluminum-bodied 300SL coupes and this is number six. This is as desirable as Gullwings come and it exceeded it’s estimate by $1.5 million, selling for $4,620,000. Also, somewhat shockingly, every car we featured here on this site from Gooding’s auction sold. The 1930 Duesenberg Model J Disappearing-Top Convertible Coupe sold for $2,640,000, which was the third highest at the sale. Second place went to the 1959 Ferrari 250GT California Spider – a car that Gooding seems to find one of for each of their sales. Where are these things coming from? It brought $3,905,000.

The final million dollar sale went to this awesome 1965 Ferrari 500 Superfast which was hammered away for $1,100,000. It’s one of only 36. It has 400 horsepower – more than just about every muscle car of its day – but the shape of it is so much sleeker than a GTO or Mustang. Super fast indeed.

Two cars that Gooding promoted heavily in the lead up to the auction also showed well. There was a brilliant green 1971 Maserati Ghibli 4.9 SS Spyder which split its pre-sale estimate, selling for $880,000. There was also an ultra-rare 1969 Chevrolet Corvette L88 Coupe. The car is a survivor – unrestored in Monaco Orange with less than 18,000 original miles. This was the king of Corvettes in 1969 – the L88 option got you more horsepower than a ZL1. This car was rated at 430 horsepower but likely put out more like 560. It doesn’t play around. And neither does its hammer price of $451,000.

And from the fun-file: this 1963 Volkswagen Beetle Sunroof Sedan – which sounds pretty normal from the name of it. Until you see it: This car was featured in the film Herbie Goes to Monte Carlo. There are desirable, well-optioned Volkswagens, but people are going to recognize this one. And for $66,000 ($15,000 below it’s pre-sale estimate) it’s going to be a lot of fun. For full results click here.