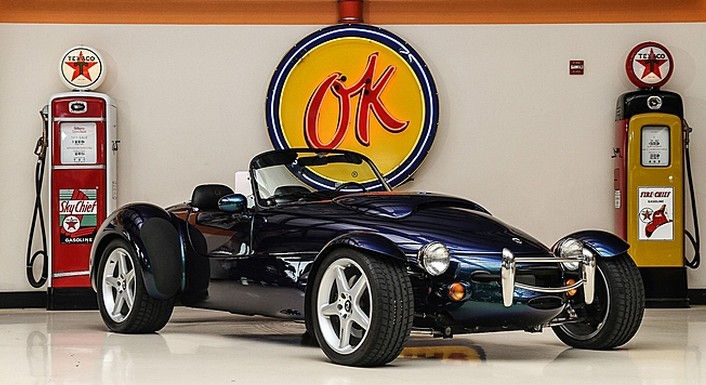 Barrett-Jackson’s Scottsdale, Arizona auction is so massive, packed with over 1,000 cars. They roll cars across the stage and hammer them sold starting on a Tuesday and go every day through Sunday. The big cars (like they ones we’ve featured from them) usually go Friday, Saturday, and (to a lesser extent) Sunday. But there are still hundreds of interesting cars that more or less go unnoticed on Tuesday, Wednesday, and Thursday. The shadow of million dollar concept cars and ultra-rare muscle cars blots out the shiny patina on the cars of the first half of the auction week. So we present some of the more interesting standouts from the first three days.

First up is this 1981 Pontiac that was used on NASCAR’s road courses in the 1980s. It is a race-winning car having been raced by Tim Richmond, Morgan Shepherd, Richard Petty, and Al Unser Sr. Valvoline-liveried cars have always looked great and with this car’s history (and the fact that it is still being used in historic racing) makes the $25,300 (with buyer’s commission) purchase price seem worth it.

There were also a number of itty-bitty microcars for sale in the first three days. There was a Vepsa 400, some Isettas, and this 1959 Goggomobil TS-250 Coupe. This car is in original condition with a 247cc two-stroke engine that will take this car up to 50 mph. It brought $27,500.

We featured a ’71 Ford Torino GT from Mecum’s Kissimmee auction (which we’ll run down in the next week or so). This is a 1971 Ford Torino GT Convertible and it is awesome. Torinos don’t get the same muscle car love that Mustangs, Mopars and Chevelles get but this might have just become my favorite-looking muscle car. Maybe it’s because I’ve overlooked it for so long – so it looks fresh, but I want it. Too bad I don’t have $37,400 to throw down for it.

One of my other favorites is the 1998 Panoz A.I.V. Roadster. The A.I.V. (Aluminum Intensive Vehicle) was the “new” version of the Panoz Roadster. It features a 4.6 liter Ford V8 making 305 horsepower. It only weighed 2,500 lbs. Plymouth stuffed a V6 in the Prowler. I think of this car as having the performance the Prowler should have. Not necessarily the car the Prowler should have been (the styling of that thing is pretty good). But so is this. It just looks like a blast to drive. Could have been yours for $49,500.

Here’s something you don’t see everyday: a 1968 Mitsubishi J23A Japanese Military Jeep. Actually, you don’t see many 1968 Mitsubishi’s period or any pre-1970 for that matter. Foreign military vehicles are something that don’t appear at American auctions all too often so this would have been an excellent time to pick one up. And for $7,150, you could hardly afford not to.

There were a number of other pre-1970 Japanese classics available. When new, Japanese cars were never perceived as being future classics. Well, that attitude made pristine examples 40 years later relatively hard to find. And restoring a $7,000 car isn’t exactly solid economics. My favorite was this 1972 Datsun 510 Wagon (I like wagons). I should have grabbed it for the $8,525 it sold for.

There are customs-o-plenty at Barrett-Jackson: resto-mods, resto-rods, other things that start with “resto” and rhyme with “mods.” And then there are insane customs. Like this “Hot Rod Hearse:”

If it entered production, I imagine the slogan would be something along the lines of “Be The First Person  to the Graveyard!” It’s pretty crazy but unfortunately it is not street legal. It sold for $17,600.

Classic trucks are becoming quite collectible and auction houses realize this and try and grab the best of them to offer. One make you can never go wrong with is Diamond T. They made mostly commercial trucks but also produced a few pickups for “regular people.” They’re among the best-looking old-school trucks you can buy. Like this 1949 201 that sold for $51,700:

And finally, from the Fun File is this 1931 Ford Model AA Tanker. In Texaco livery, it would make a great static display parked near historic pumps or other automobilia. It’s quite rare but, nevertheless, I recommend driving it – it only cost $44,000.