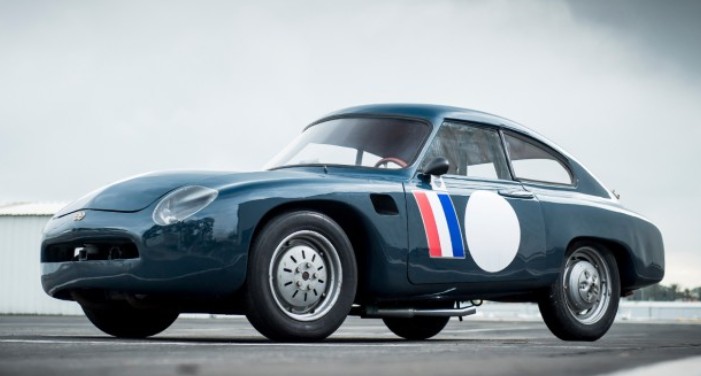 Charles Deutsch and Rene Bonnet teamed up for the first time in 1938, applying both of their surnames to automobiles. In 1947, they would shorten it to just “D.B.” and would continue building cars through 1961 when Bonnet ventured out on his own, until his new company was scooped up into Matra.

The HBR5, of which we’ve already featured a highly customized example that has different body work than this car, was a sports and racing car built between 1955 and 1961. In total, 450 were built and this one is powered by a 65 horsepower, 848cc flat-twin. That’s a decent amount of power from such a tiny engine.

But with a lightweight fiberglass body, these were stout cars in their class on the track. For example, this car, while owned by famed designer Brooks Stevens, competed in the 1957 12 Hours of Sebring, failing to finish with drivers Guy Storr and Hal Ullrich. D.B. cars don’t come up for sale often (I’ve featured nearly every one of them in the past five years and we’re now standing at “four”). This one should bring between $100,000-$130,000. Click here for more info and here for more from this sale.

Deutsch-Bonnet (which would later become known simply as “D.B.”) began building racing cars in the late-1930s, just prior to war breaking out. They picked up right where they left off immediately after the conclusion of World War II.

This car competed in the first race held in France after the war and it was one of only two cars entered that had actually been built after the war (both were Type DBs) – and they had front-wheel drive and four-wheel independent suspension. This car uses a 2.0-liter straight-four engine.

I’ll attempt to break down this car’s complete racing record:

It competed here and there from 1951 through 1958, but it had quite the important race history up to then. It spent the next 25 years being driven around Nice on the French Riviera. In 1974 it was purchased by the current owner who dug into the history of the car to find out what he had. Yes, he had scored big.

The chassis (chassis no. 5) is original and it is stated that so is 80% of the bodywork. The car has competed in a number of historic races including five appearances in the Le Mans Classic. It is eligible for almost every historic event and is road legal. This is one of the first race cars (actually the second) built in France (and maybe Europe) after the conclusion of the Second World War. No estimate is given so that should be a sign that it could be rather pricey. Click here for more info and for a ton of old photos. And here for the rest of Osenat’s auction lineup.

Top sale went to this 1960 Maserati 3500 GT Spider Vignale – in all it’s wondrous Photoshopped glory. It sold for $303,000 – about three times more than the next highest-selling car.

This 1954 Panhard Dyna Junior convertible really popped in this shade of gold. I can’t tell if it’s attractive or hideous, but it certainly grabbed my attention. It was one of two Dyna Juniors that sold. This one for $19,000 and one in blue for $20,000.

And finally, one car I found quite pretty was this 1962 Simca Plein Ciel – which was the hardtop coupe version of the Simca Aronde. It sold for a touch under $23,000. For complete results, click here.

Known as Deutsch-Bonnet until 1947, D.B. was a French manufacturer founded by Charles Deutsch and René Bonnet, who left the firm in the early 1961 to start his own company. D.B. started in 1938 building Citroen-based racing specials and turned to road cars in 1952.

The Le Mans model was introduced in 1958 and lasted until the company closed up shop in 1961. All their road-going models were Panhard-based using Panhard flat-twin engines. The Le Mans had an 850cc version making about 60 horsepower.

The Le Mans name was not wishful thinking – D.B.s won their class at the 24 Hours three separate times. These were legitimate sports cars. Approximately 200 Le Mans models were built and they might not be the most powerful European sports car of the 1960s, but they are certainly rare. For more information (in French), click here. And fore the rest of Osenat’s auction lineup (including another rare D.B.), click here.