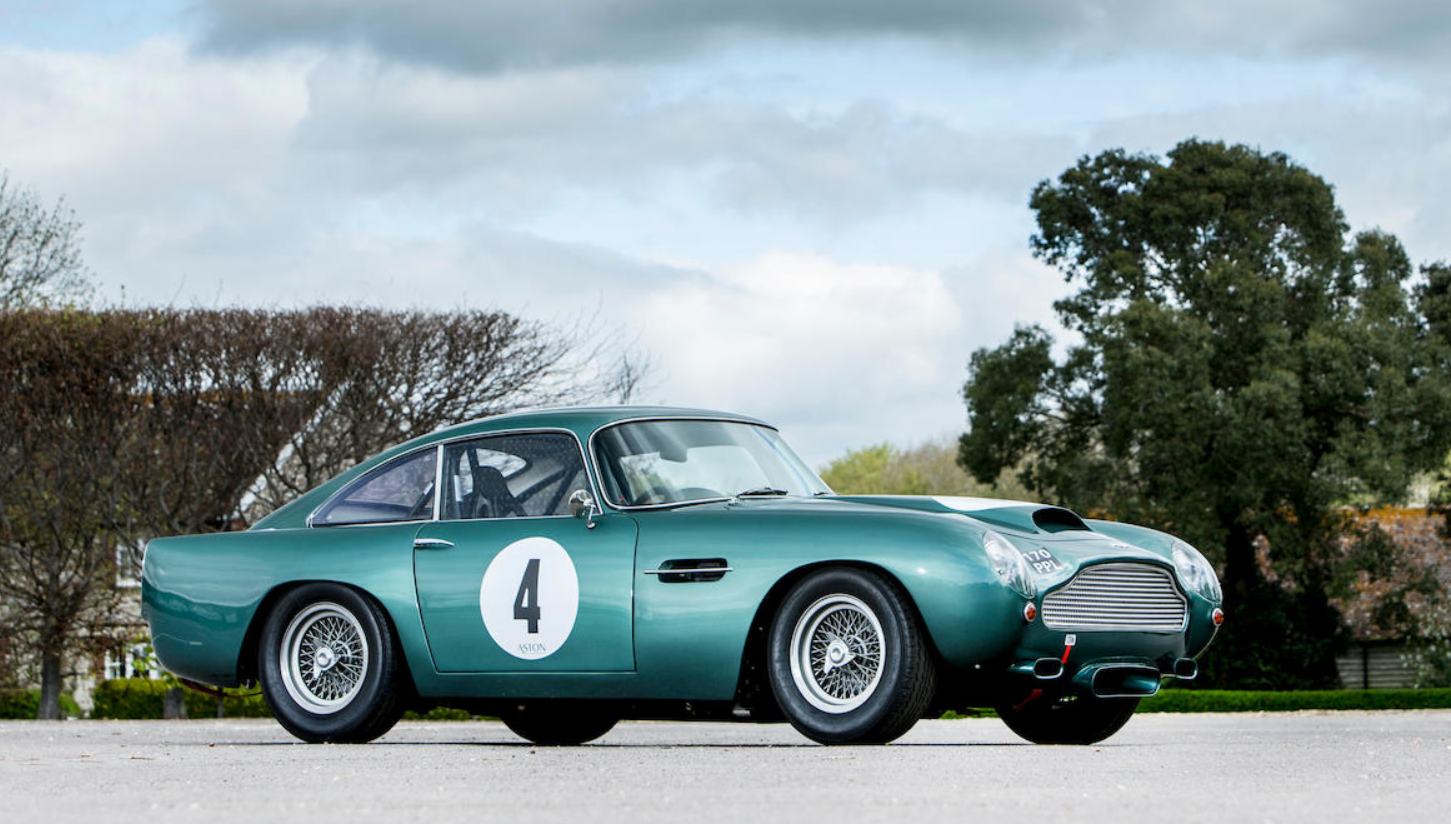 The Aston Martin DB4 was already the best-looking Aston to date when it arrived on the scene in 1958 (and possibly remains as such), but when they turned it into a lightweight factory special, it looked both pretty and mean. That’s without mention of the ultra-high dollar DB4GT Zagato (of which Bonhams also has one at this same sale).

The high performance DB4GT went on sale in late 1959. We’ve featured the original factory prototype, but what we have here is one of the most successfully campaigned classic British race cars on the market. So what differentiates this from the normal DB4? Well it’s a few inches shorter, for one. Alloy bits were applied everywhere from the doors, hood, and even some suspension parts.

With lightweight cylinder heads and high compression pistons, the 3.7-liter straight-six made 302 horsepower. This particular car was fitted with an Aston-built 4.2-liter racing engine about 15 years ago. The original engine comes with the car, but for competition purposes its safer to use a reproduction (albeit a correct, factory-built one).

Road registered when new, this car competed in some hillclimbs and circuit events, acquiring damage from two separate accidents in the process. The factory completed all repairs. With known ownership history from new, this car comes with an extensive file of its successes on the historic racing circuit. Only 75 DB4GTs were built (with another 19 Zagato-bodied versions and the lone Bertone Jet). This very usable example should bring between $3,100,000-$3,300,000. Click here for more info and here for more from this sale. 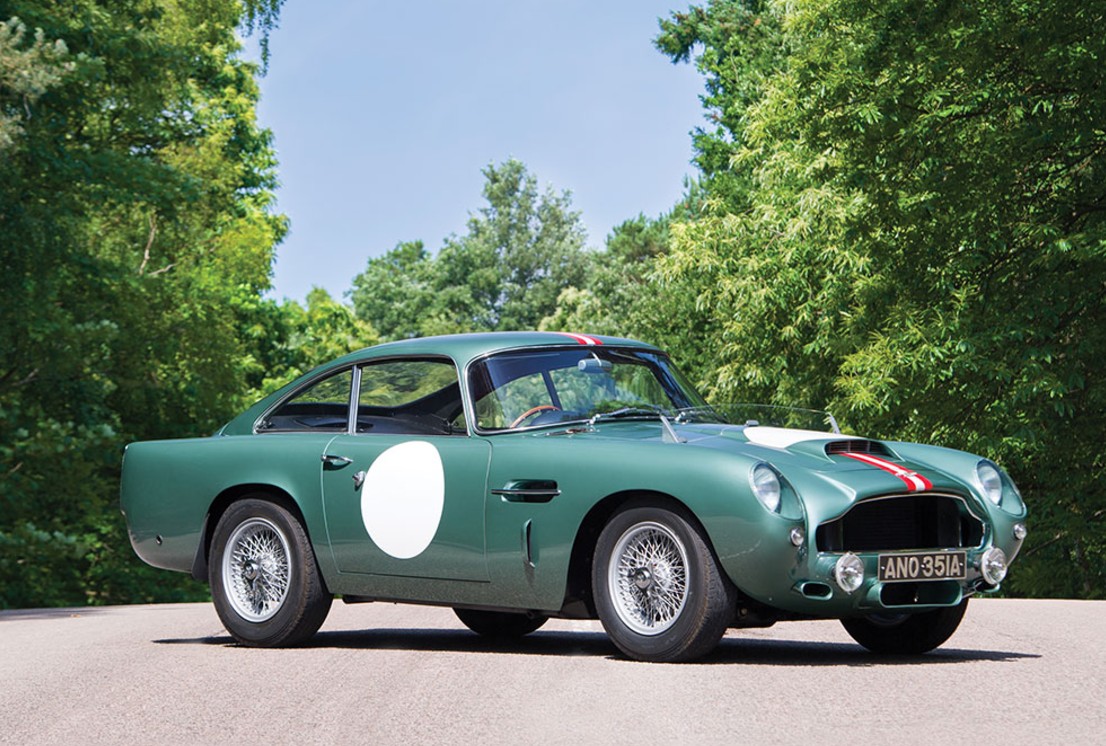 The Asrton Martin DB4, DB5, and DB6 are the best looking of all the classic Astons (though I will forever maintain that the DB7 is the best looking period, especially the convertible). The DB4 was built between 1958 and 1963 until the DB5 took its place.

Among the most sought-after DB4s were the DB4GTs. These were lightweight, short-wheelbase, near-racing spec cars. Nineteen of them sported bodies by Zagato. One of them received a Jet Age body from Bertone. In all, 75 DB4GTs were built – but this is the first.

The GT came with an upgraded engine, a 302 horsepower 3.7-liter straight-six to be exact. Top speed was 151 mph – pretty stout for something pre-1960. The story of this car is that program manager John Wyer took an early DB4 chassis, shortened it, and wrapped it in aluminium to save weight. They tested it at Le Mans and actually entered in the 1959 race. Here’s how it fared:

So maybe that race entrance was a little premature. After Le Mans, Aston converted this car to road spec and pushed it into service as a press car. The first real owner came in 1961 and it turned out to be a relative of the Royal family. The current owner acquired the car in 1986 and had the factory restore it in 1989. Between their original acquisition and now, the car was at one point owned by actor Rowan Atkinson.

At the time of writing, RM has not yet published an estimate for this car. It won’t come cheap, and rightly so. Click here for more info and here for more from this sale.

This is one of the Holy Grail Aston Martins. The DB4GT itself is a rare, highly sought-after machine – but those handful of Zagato versions are really where it’s at. The DB4 was produced by Aston Martin between 1958 and 1963. The DB4GT came out in late 1959. It was a lightweight, high-performance version of the standard 2+2 road car.

The engine in the GT (including this car) is a 314 horsepower 3.7-liter straight-six. That’s actually serious horsepower – even today. About 75 standard GTs were built. But this is one of only 19 Zagato cars.

The car is instantly recognizable with that grille as an Aston. But the soft, sloping rear end makes it obviously a work of Zagato. This is car #14 and it was shipped new to Australia where it led a life as an independent racer. It went back to the U.K. in the 1990s, was restored in 2002 and has been shown all over the world. What’s truly impressive: not one of the 19 DB4GT Zagatos has traded hands in more than 10 years. This truly is a car that rarely comes up for sale. RM compares it to the 250 GTO and they aren’t wrong. While it won’t bring $30+ million dollars, it will definitely bring multiple millions. Click here for more info and here for more from this sale.

Bonhams’ almost exclusively Aston Martin sale (there were a few Lagondas), held on May 19, 2012, was a huge success. The sell rate was very high and some cars brought a lot of money – and by a lot of money I mean some cars sold for up to five times the amount of the high-end of their estimate. Such as our featured 1971 DBS Estate. The upper end of the estimate was $110,000. It sold for $533,000. Wow.

The second highest-sale was a 1962 DB4 Vantage Convertible with single-family ownership from new. It sold for $967,000.