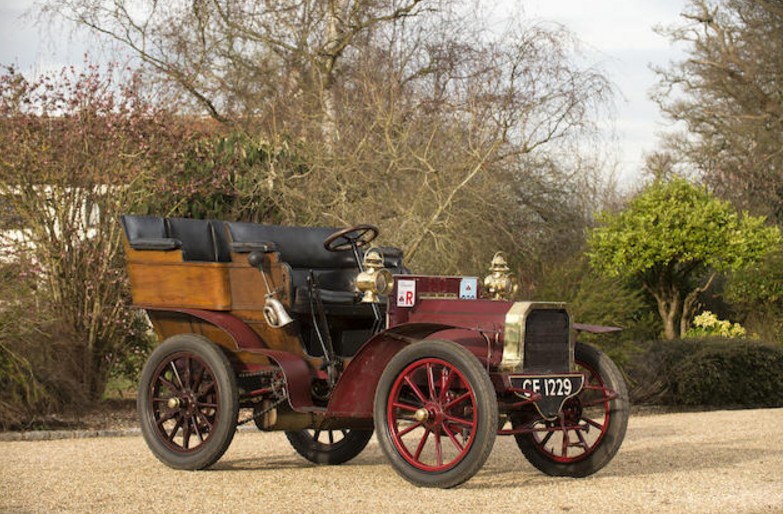 Artcurial’s November 11th sale in Paris included our featured Siata Spring that sold for $15,900. The top sale was a 1974 Lancia Stratos Group 4 Rally Car in Alitalia livery. It sold for $458,000. Complete results are here.

Back to Bonhams for their November 14th sale at Harrogate, Great Yorkshire Showground. The top sale was this 1965 Ferrari 330GT 2+2 that was in, uh, “driver condition.” Apparently it had been restored about 30 years ago but it needs a little work to be perfect. Looks pretty cool as is though. It sold for $108,000.

And for something really different, this 1951 Guy Otter Pantechnicon moving van. I’m not sure what you’d do with it, other than help your buddies move, but it’s old and pretty cool. It sold for $19,100.

Our featured Metz Model 25 Tourer sold for $13,600. You can find complete results here. Our next stop is Anaheim, California and Mecum’s November 15-17 sale. Our featured Factory Five GTM failed to sell. Top sale went to this 1932 Ford “McMullen” Roadster. It’s a fairly iconic hot rod built by Tom McMullen beginning in 1958. The flame design is by Ed “Big Daddy” Roth. The car has popped up everywhere and sold for a serious $700,000.

A car we featured for Mecum’s Monterey Sale (that failed to sell) was brought back for this west coast auction and sold. It was the Duesenberg J-306 Willoughby Limousine and it sold for $370,000. Other interesting cars included this 1982 Jaguar XJS Koenig Special – a car tuned in 1986 new by Koenig for over $100,000. Only 14 were built. This one cost $13,500 today.

The Gladiator Cycle Company was founded in 1891 by Alexandre Darracq and Paul Aucoq. From here the history of the marque becomes complicated: in 1896 Darracq sold the company to a group of Britons including Harvey du Cros. Darracq then went on to found the automobile company that bore his name. Meanwhile, Gladiator merged with Clément Cycles – which was founded by Adolphe Clément. The Clément-Gladiator company built it’s first car in 1896. In 1903, Adolphe Clément resigned to start Clément-Bayard and build cars of his own.

Gladiator produced cars under the name “Gladiator,” as well as “Clément,” simultaneously.  At the same time, Adolphe Clément began selling his new, French-built Clément-Bayards in England under the name Clément-Talbot. There were other Clément-dash-somethings as well, but we won’t go into them now.

The car featured here is a 12/14hp Type P and it features a four-cylinder engine and a four/five seat coachbuilt body by Fred W. Baker Ltd of Stourbridge. It looks nice and has a detailed ownership history. There were so many automobile marques that didn’t last too terribly long and I find them all pretty interesting. Quite a few still have examples extant, while countless marques have been lost to time. The Gladiator marque ceased production in 1920.

The pre-sale estimate is $40,000-$48,000. For the complete catalog description, click here and to see the rest of Bonhams offerings for the RAF Museum in Hendon, click here.