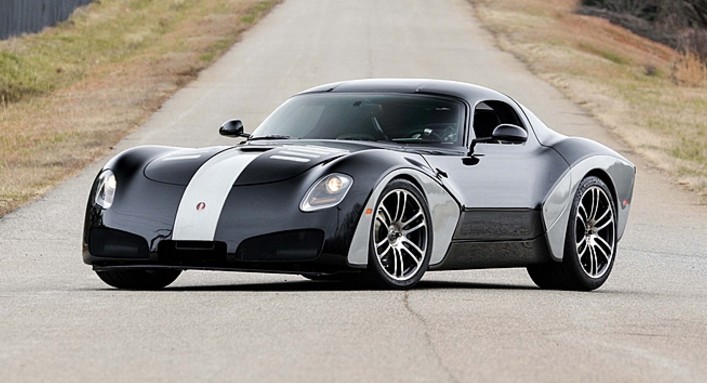 When a new supercar manufacturer springs up (and let’s be honest, it’s often), they design a wild, sporty ride and then, only afterwards, do they remember that they have to make it go. Sourcing engines for your homegrown sports car is the best option, as building your own probably isn’t too feasible. There are many Chevrolet, Ford, Mercedes-Benz, etc. powered cars. This one is Viper powered.

Scott Devon’s Devon Motorworks was active between 2008 and 2013. Introduced at the 2009 Pebble Beach Concours, the GTX is powered by a front-mounted 8.4-liter V-10 from a Dodge Viper that makes 650 horsepower in this car (and with a carbon fiber body, it’s no slouch). One serious supercar credential this car boasts is that it has front-hinged McLaren F1-like gullwing doors.

Only two of these were ever made because Dodge ended production of the second-generation Viper, which was the basis for this car. That makes this a very rare, very American, supercar. Click here for more info and here for more from Mecum.

Mecum Auctions’ Kansas City Auction (which ended on March 31) did not have any huge sales that broke any records. In fact, there were numerous sub-$10,000 cars that would have been a lot of fun to buy. As far as highlights go, we’ll start with the Divco Milk Truck we featured, which sold for almost exactly what I predicted at $52,000.

.As far as cheapies go, this 1955 Chevrolet Ambulance that included period medical response equipment from the 1970s sold for only $3,100.