Ferrari turning their road-going cars into competitive race cars had kind of been a rare event since… well, the 1960s. Sure, they had “Challenge” race cars where 348s and F355s would compete against each other, but it’s not like they were taking them to Le Mans.

That sort of changed with the 550 Maranello. While Ferrari themselves weren’t outright building racing versions of the 550, some privateer teams were. The cars appeared in a few different classes/forms across a variety of series worldwide. We’ve already featured an ex-Le Mans GTLM version, and this is a GTC. The GTCs were “factory-built” in that Ferrari actually partnered with N-Technology to build two cars, both of which were constructed in 2003, after 550 Maranello road car production ceased. The other example is still owned by Ferrari.

Power is provided by a 5.5-liter V12. The competition history for this chassis included:

The following year it won the Italian Speed Hill Climb championship in the GTM category. The engine was rebuilt in 2016, and the current owner bought it the next year. It’s been restored to its Spa livery and now carries a pre-sale estimate of $2,300,000-$2,850,000. Click here for more info and here for more from this sale. 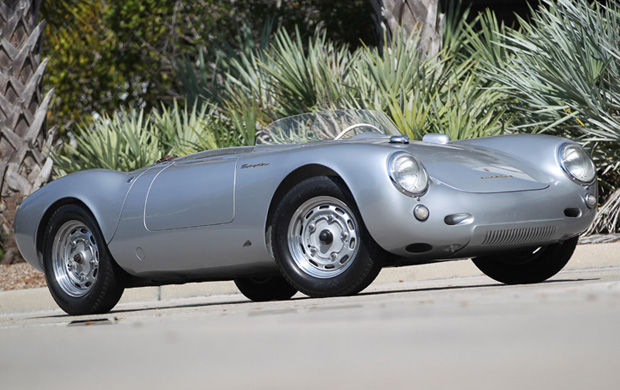 Shelby Cobras, Ford GT40s, Lotus Sevens and the Porsche 550. These are cars of which replicas far outnumber the real thing. But this is a real Porsche 550 Spyder. Only about 90 550s were built and this one retains everything it originally came with.

The Porsche 550 was a great track-day car back in the mid-1950s (it still is, but they don’t come quite as cheap as they used to). Many of them were used and abused on weekend jaunts to the nearest road course or former air base. The most famous of these cars was James Dean’s “Little Bastard” that he was tragically killed in on his way to a race.

To have an original, unrestored engine in one of these cars is amazing. Nor does it have any replacement bodywork. It was a street car for most of its life, serving as daily transportation at one point (sunny days only, I presume).

And what fun that would be. The 1.5 liter flat-4 makes 125 horsepower, which may not sound like much but consider how much a tiny car like this weighs with all aluminum bodywork. Aluminum bodywork and a lack of interior.

Luxurious comfort is a small thing to sacrifice for a car this amazing. They do not come up for sale often and by “not often” I mean “almost never.” There are few Porsche models that are more collectible, desirable or iconic than this. The price reflects that, estimated between $2,200,000 and $2,600,000. The buyer may adopt the name of James Dean’s infamous car for themselves, but only if they add “lucky” to the beginning of it.